Paying a Heavy Price for Freedom 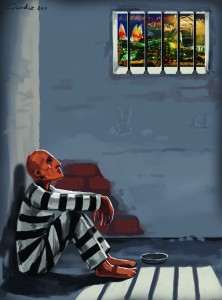 Azerbaijan has just gone through its worst year for human rightsentering the New Year with dozens of political prisoners including prisoners of conscience, the Institute for Reporters’ Freedom and Safety (IRFS) said today. The authorities introduced a series of restrictive laws, harassed and persecuted journalists, bloggers, free speech activists and interfered in the work of nongovernmental organizations, crushing any form of political dissent.

As Azerbaijanis prepare tocelebrate the New Year with families and friends,  the nine journalists, two bloggers and three human rights defenders in Azerbaijan will spend the festive season alone behind bars.They have been detained or jailed on politically motivated charges in connection with freedom of expression and freedom of assembly.Some of them were allegedly tortured in the first weeks of arrests.

A journalist with the “Bizimyol” newspaper, Parviz Hashimli was charged on September 17 after police allegedly found six guns and ammunition in his house. While he was serving his pre-trial detention, his pregnant wife, Ilaha Hashimova, lost her expected baby because of extreme psychological stress shesuffered in relation to her husband’s arrest.

Journalist Avaz Zeynalli’s daughters, 12 year old Seljan Zeynalli and 10 year old Banuchichek Zeynalli, believe their father is in jail for telling the truth. While they are extremely proud of his struggle for justice, they are hugely upset their father can’t be with the family to celebrate the holidays.

Prominent human rights defender Anar Mammadli is denied the opportunity to spend the New Year with his family. The chairman of the independent election watchdog NGO, Election Monitoring and Democratic Studies Center, Mammadli was thrown behind bars because of exposing electoral irregularities during the presidential election in October. If convicted, he may face up to 16 year imprisonment under three charges.

IRFS notes with dismay that dozens of journalists, bloggers, right defenders and youth activists, will spend the New Year behind bars, away from their families and friends. These people are:

The Constitution of Azerbaijan protects human rights and fundamental freedoms, including inter alia the right to freedom of thought and expression (Article 47), the right to freedom of assembly (Article 49), the right to access information (Article 50), and the right to freedom of association (Article 58).Article 12 of the Constitution states that “The highest priority objective of the state is to provide for the rights and freedoms of a person and citizen.” Furthermore, Article 12 states that “The rights and freedoms of a person and citizen listed in the present Constitution are implemented in accordance with international treaties wherein the Azerbaijani Republic is one of the parties.” Through its membership in the United Nations, the Council of Europe, and the Organization for Security and Co-operation in Europe (OSCE), and through its accession to major international and regional human rights treaties, Azerbaijan is committed to respect and protect the rights to freedom of expression and information.

To this end, IRFS calls on the Azerbaijani authorities to immediately and unconditionally release all persons in detention or imprisoned in connection with exercising their right to freedom of expression, assembly and association. IRFS calls on the government of Azerbaijan to respect the rights to freedom of expression, association and peaceful assembly, both online and offline, and refrain from targeting human rights defenders, journalists and others who peacefully express opinions critical of the authorities.