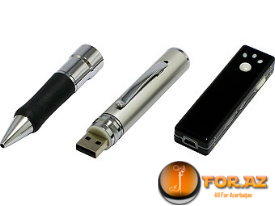 A criminal case under article 233-1.1 (preparing, obtaining, keeping, carrying, delivering, giving to someone and selling of things that are prohibited from being in circulation by law – (taken out from civil circulation) of the Criminal Code has been instituted against four Azerbaijani citizens for bringing pens with secret cameras, and secret listening devices that have certain signals. The Institute for Reporters’ Freedom and Safety was told this by Internal Affairs Ministry Press Council Head Sadig Gozelov.
“Products imported by those people have been identified by the employees of Air Transportation Chief Customs Department and were sent to the National Security Ministry to be checked for their legality,” said S.Gozelov. “The devices are technical means to obtain information secretly. Therefore on 25 May a criminal case under article 233-1.1 of the criminal Code was opened by the Prosecutor’s Office of the Republic, and Ministry of Internal Affairs Chief Investigation Department will carry out the investigation into the case.”
S.Gozelov’s answered a question regarding the lack of ban on video-cameras in Azerbaijan Republic Law “On List of Things That Are not Allowed to be in circulation.”
“According to requirements of presidential Decree (12 September, 2005) ‘On Additional Measures in Regulating the Circulation of Things that Have Limited Civil Circulation’, the citizens have not been granted special permission to circulation of technical means that are intended to secretly obtain information, and the pen video-cameras in question also belong to these means.”
Internal Affairs Ministry Official Gozelov emphasized that there’s no illegality in opening a criminal case, but he could not give any additional information because an investigation into the case is in progress.
Media Rights Institute Director Rashid Hajili told IRFS that the circulation of devices with video-camera is not banned by law. “If these devices are used for reasons that violate law or in criminal actions, then it is possible to talk about a certain criminal case,” said R.Hajili.
Previous Post

SEVERAL CHANNELS THAT ARE BROADCAST VIA CABLE TV CAN BE BANNED