Photo Reporter Ill-Treated by Governor While Performing Her Job 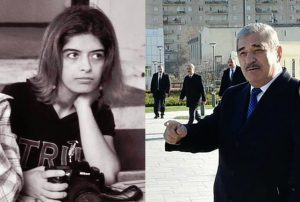 Ibrahim Mehdiyev, the head of Yasamal district executive power, behaved rudely towards freelance journalist and photo reporter Fargana Novruzova covering the protest rally against the demolition of Haji Javad Mosque in Yasamal district. The moment was caught by the journalist’s video camera while she was filming at a distance.

This is how Novruzova describes the incident. “I heard that Haji Javad Mosque in Sovetski [a residential area] was going to be torn down, and rushed there as soon as I left the court after Mehman Huseynov’s hearing. I began filming, and I tried to get comments from the head of Yasamal District municipal authority, Ibrahim Mehdiyev and asked him questions. He refused to speak and pushed my camera so hard that it slapped me in the face. The impact was strong. My face turned red and swelled where the camera hit me. The redness and swelling are now gone,” Novruzova said.

The photo reporter has not yet decided whether to appeal to court over the incident.

Journalist Fargana Novruzova has worked for Objective TV and ANN.az website. She currently operates as a freelance journalist. She is known for her interesting photos shot in some of the most tense situations.

Background: On 12 April, about 200 believers gathered around Haji Javad Mosque on 20 Chingiz Mustafayev Street, Baku, protesting against the rumoured demolition of the mosque in an attempt to prevent the mosque from potential destruction. Voicing their concerns over the news about the possible demolition of Haji Javad Mosque, the believers said the mosque was their place of prayer and a protected historical monument which they did not want to be dismantled. The mosque is on the list of newly discovered historical and cultural monuments of the Ministry of Culture and Tourism.

Mehman Huseynov’s Conviction Upheld in a Mockery of Justice