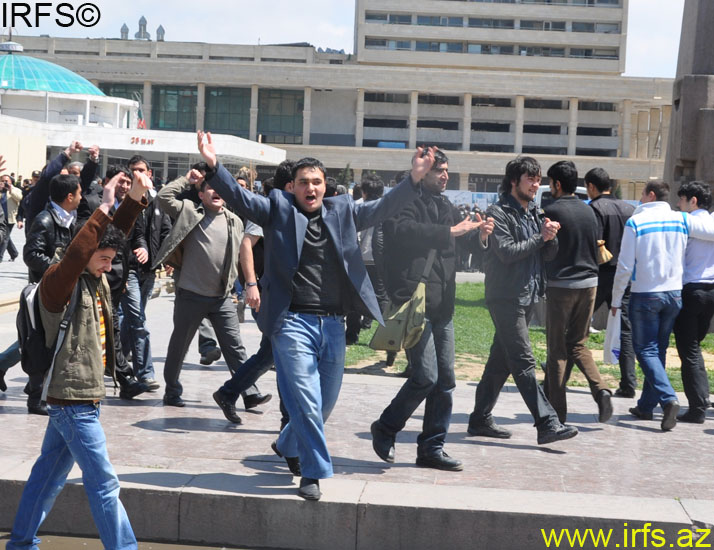 Today, 30 April, police wanted to prevent the protest action in front of the Azerbaijan State Oil Academy. Media representatives faced pressure during the incident. Although there were people there in plain clothes, it was obvious that they were police.
They hindered the journalists’ work and didn’t want to allow them to take photos or to film, and used psychical pressure against them. These people who were pretending to be citizens treated the journalists rudely, and did not let them implement their professional work. Several media representatives were detained by police.
The youth wanted to hold a remembrance for victims of terror committed in ASOA on 30 April, 2009. The police and the plain clothed people interfered in youth approaching the building of ASOA. They dragged them forcibly onto the buses and took them to an unknown direction. The police encircled the area and closed Azadlig Avenue in the early morning and put a restriction on the movement of civilians.
The action continued for two hours. During this time 28 May subway station was completely surrounded by police. Police removed citizens from the area by force. Although youths came from different directions unexpectedly several times and voiced slogan “No to terror,” the police removed them from the area by force. The police and plain clothed people detained youth activists, members of youth organizations and human rights defenders participating in the action. They were taken onto the buses that were brought beforehand, and then to the Nasimi District Police Office and Police Department #22. A group of youth who were singing the anthem of Azerbaijan Republic and moving in the direction of “Samad Vurgun” garden faced the same fate. Baku City Chief Police Office Deputy Chief Yashar Aliyev did not give any explanation to journalists.
On 30 April, 2009, at around 9:30 a.m., Georgian Citizen Farda Gadirov entered education building #2 of the State Oil Academy of Azerbaijan and shot everyone he met on the first floor to the sixth by “Makarov” pistol. As a result, 12 people died and 13 people received various injuries. Farda Gadirov`s corpse was found during the incident. It was said that he committed suicide.