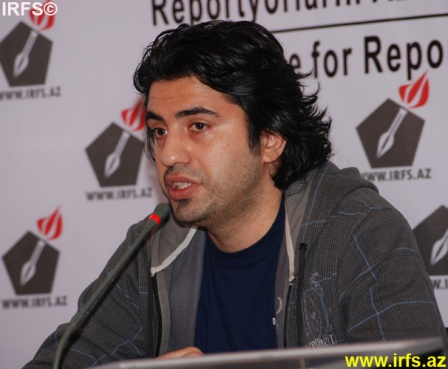 Today, 2 March, in the Nasimi District Court, under the chairmanship of Judge Ikram Shirinov,   a court hearing was held on the lawsuit (for being subjected to police pressure) of the Institute for Reporters' Freedom and Safety Chairman Emin Huseynov against the Ministry of Interior, Nasimi District Police Department and Police Unit 22 of the Nasimi District Police Department.
E. Huseynov's defense lawyer Elchin Sadigov put forth a motion and demanded that four witnesses be interrogated, E. Huseynov’s medical examination opinion be approved, the list of people taken to the Nasimi District Court on 14 June be submitted to the court and they be interrogated, and the list of police be submitted to the court.
The judge fulfilled the motion regarding a medical examination, however Huseynov request in the lawsuit to institute a criminal case on his beating was rejected.
The next hearing on this case is scheduled to take place on 16 March, at 4:00 p.m.
On 14 June, a group of fans of Cuban sociologist revolutionist Ernesto Che Guevera was trying to conduct an event in "Alaturka" restaurant when the employees of law enforcement organs interfered. IRFS Chairman Emin Huseynov, who was there observing and filming the event, was beaten by police in the Police Department 22. Emin Huseynov, who lost his consciousness due to police pressure, received treatment for more than twenty days in the hospital.
Previous Post