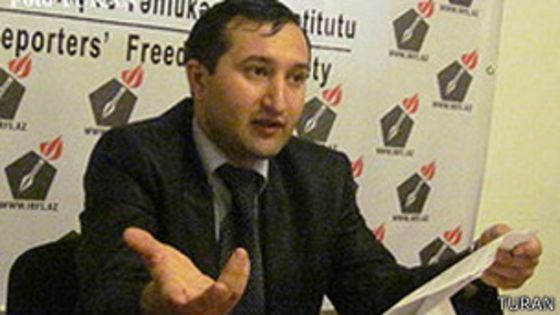 The jailed Bizim Yol newspaper reporter Parviz Hashimli has filed an additional complaint with the Plenum of the Supreme Court (Ed: Pursuant to the Article 422 of the Code of Criminal Procedure).  In his appeal, Hashimli states that he has been falsely arrested and that the Ministry of National Security (MNS) officers who were involved in his arrest have now been either arrested or discharged. Parviz Hashimli was arrested in September 2013 and charged under articles 206.3.2 (smuggling) and 228.2.1 (illegal acquisition and storage of fire arms) of the Criminal Code. He was sentenced to 8 years in prison by the Baku Grave Crimes Court on May 15, 2014; the verdict was later upheld by Baku Court of Appeal on December 24, 2014. It  became final on October 27, 2015, when the Supreme Court rejected the journalist’s second appeal.

Hashimli’s lawyer, Bahruz Bayramov, confirmed the submission of the appeal to the Supreme Court Plenum, adding that “Parviz Hashimli is facing a great injustice”.

“The MNS officers involved in arresting Parviz are themselves now behind bars [the MNS officers were arrested in October 2015 for abuse of power]. Elshan Musayev, the lead investigator for the journalist’s case, has been sacked. It is unjust that Parviz is in jail after all that has happened. We hoped that he would be released in December, but it did not happen. Now, we have appealed to the Plenum of the Supreme Court. It will probably take 4-5 months before our appeal is considered. It’s tough to predict the outcome,” said the lawyer.

Parviz Hashimli was arrested by the MNS in 2013. In October 2015, the Minister of National Security Eldar Mahmudov was dismissed from his post by the order of the President, and a criminal case was subsequently launched against a number of MNS employees. In January 2016, Parviz Hashimli’s lawyer stated that Elchin Aliyev, the chief of the Counterterrorism Center of the MNS, and his deputy, Ilgar Aliyev were directly involved in Hashimli’s arrest. The lawyer noted that the MNS had offered 1 million manat to Parviz to slander the Chairman of the Azerbaijan Railways CJSC Javid Gurbanov and the former deputy Minister of National Security, deputy chief of the Anti-Corruption Department under the Prosecutor General, Major General Ali Nagiyev. “They wanted to use Parviz Hashimli to discredit the two officials. But Parviz endured methods of torture and refused to give in to their demands.”

The deputy chief of the MNS Counterterrorism Center, Ilgar Aliyev, who was reportedly involved in the arrest of the journalist, was arrested in October 2015. In December 2015, Ilgar Aliyev took his own life by hanging himself in his cell at the Baku Detention Facility.