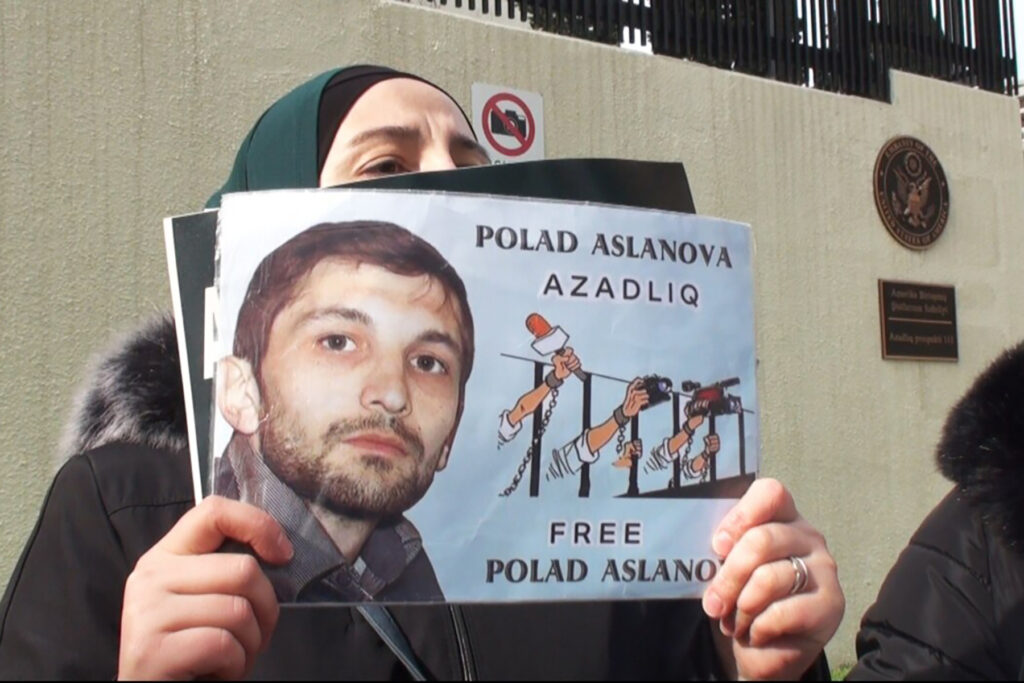 Gulmira Aslanova – the wife of the convicted journalist Polad Aslanov held a protest in front of the Penitentiary Service building on April 4. She was protesting against the beating of her husband in colony No. 1.

She visited her husband in the colony last week and saw signs of violence on his face.  “His face was swollen, there were nail marks on his cheeks and throat,” Aslanova said.

As it turned out, Polad was beaten by a cellmate. “This inmate reacts harshly to any action of Polad demanding from him “not talk”, “not laugh”.

“This is not the first time Polad has been beaten in the colony,” she said, demanding an investigation into the violent attack on her husband. The inmate who attacked Polad should be transferred to another colony.

She believes that Polad’s pressure is caused by the fact that he is fighting for his rights and giving publicity to the negative phenomena in the colony.

“They deliberately set up provocations against my husband through the hands of other inmates. No inmate would dare raise his hand against a political prisoner without the permission of the administration,” she said.

Aslanova sent appeals to the prosecutor’s office, the Office of the Ombudsman, the Baku office of the International Committee of the Red Cross.

The department of public relations of the Penitentiary Service declined from any comments.

It should be recalled that the founder and head of the website xeberman.com Polad Aslanov was arrested in June 2019 on charges of treason and sentenced to 16 years of imprisonment. Human rights activists recognized him as a political prisoner. On February 24, the Supreme Court reduced his sentence to 13 years of imprisonment.