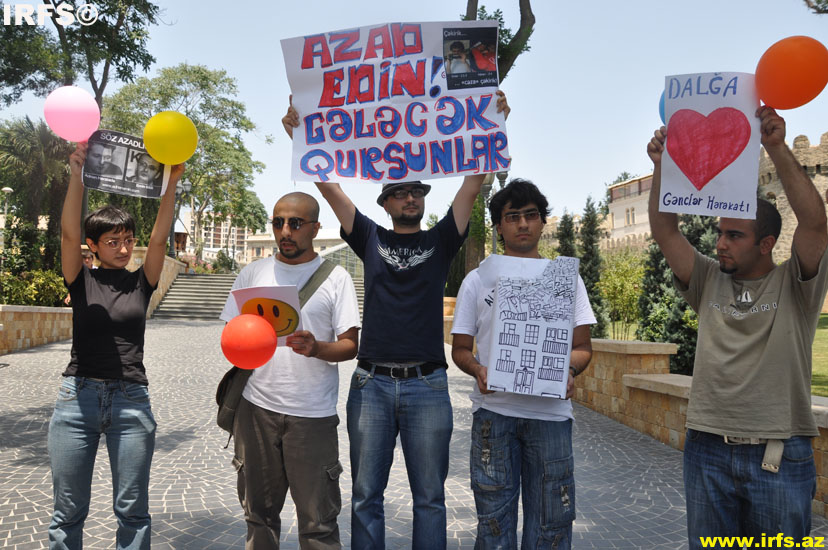 Today, 8 July, Dalga Youth Movement organization activists conducted a protest action in front of the Presidential Administration to demand for the release of imprisoned bloggers Emin Milli and Adnan Hajizade. Police prevented journalists from implementing their professional activity and treated them rudely.

Police interfered in the journalists’ rights to obtain information freely and ask for an interview, and tried to remove them from the area.

The action participants shouted out “Freedom for Adnan and Emin!” “Annul the unfounded court verdict!” and “End persecutions against youth!” and they walked through the philharmonic society to approach Presidential Administration.

The police detained the youth in front of the Presidential Administration and took them into cars. The Police also did not allow Dalga activists to read the resolution of action.

In the resolution the activists called on the President to interfere into the fate of the bloggers, and to have them released. Five activists were detained and taken to an unknown location. One of the detainees, Dalga Youth Movement activist Ramin Hajili, told the Institute for Reporters` Freedom and Safety that they were taken to the Sabail District Police Office Police Department #9.  “Although we were told that our case will be sent to court, they changed their opinion and freed us,” stressed Ramin Hajili.

On 7 July Dalga Youth Movement conducted an action in Tbilisi on the defense of Emin Milli and Adnan Hajizade. The action began at the front of Azerbaijan’s Embassy in Georgia and continued through the city to Rustavelli metro station. The action participants chanted slogans in english “Give me freedom, give me fire!”, “Freedom for Adnan and Emin!”, and in russian “Blogging is not a crime!”

Police and the embassy’s security guards were interested in the aim of the action. The Movement’s Administrative Board Head Agarahim Poladov provided a verbal explanation and then they continued the action. The action was successful.

The population was given leaflets in English that provided background information about the previous work and arrest of Emin Milli and Adnan Hajizade.

Today, is the first anniversary of the arrest of Emin Milli and Adnan Hajizade.

On 8 July, at approximately 8:00 p.m., Emin Milli and Adnan Hajizade were sitting at a table in “Lebonese” (Livan) restaurant along with several other young adults, when two people that looked like sportsmen came up to them, and attacked them causing physical injuries. Although they appealed to police as victims, police detained Adnan and Emin as suspected persons for 48 hours and freed the attackers. On 10 July, Sabail District Court Judge Rauf Ahmadov issued a decision under article 221.2.1 (hooliganism) of the Criminal Code to sentence Emin Milli and Adnan Hajizade to two months pre-trial detention. On July 20 the Appellate Court upheld the decision of the lower court. The investigation of the criminal case was concluded and a criminal case under articles 221.2.1 (hooliganism) and 127 (inflicting intentional minor bodily harm) was opened against E.Millli and A.Hajizade and the case had been sent to court to be considered. According to the verdict of the Sabail district Court, Emin Milli was sentenced to 2,5 years imprisonment and Adnan Hajizade to 2 years imprisonment on 11 November. On 10 March, the Baku Appellate Court adopted a decision to uphold the verdict of the Sabail District Court. Local and international organizations recognized the youth bloggers as prisoners of conscience.

US STATE DEPARTMENT CONCERNED ABOUT NEW VERDICT AGAINST EYNULLA FATULLAYEV