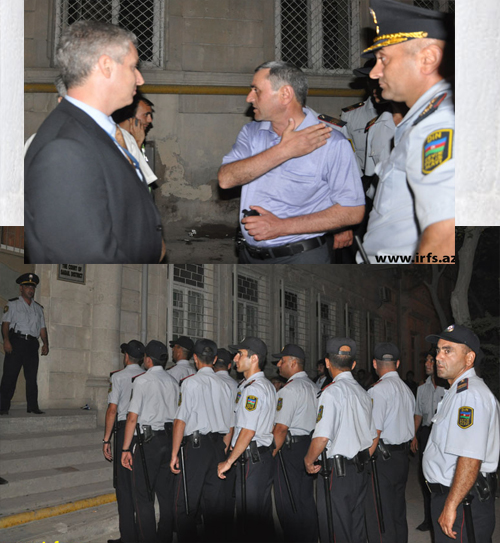 Yesterday, (10 July) occurred serious legal violations and pressures against human rights defenders and media representatives during observation on the arrest event of “Alumni Network” Youth Association’s coordinator and ANTV online TV’s chairman Emin Milli (Abdullayev) and  one of the “OL” Youth Organization coordinatiors, well-known internet videoblogger Adnan Hajzadeh. Journalists, right defenders,  local and international organizations’ representatives, came to the Sabail police District  in connection with  youth’s carrying there at 14 : 00, distanced and not able to obtain any information about the incident.
Approximately at 18:00 youth were taken out secretly from back door like a dangerous criminal and carried to the Sabail District Court.
Analogical event occured in Sabail District Court. So,  again  prohibited journalists to take photos while carrrying youth secretly to the Court building in a humiliating situtation.  Court only allowed  youth’ lawyers Isakhan Ashurov and Elton Guliyev to participate in the hearing. Assembled in front of the court, the journalists, rights defenders and relatives of detained youth prohibited to participate in the hearing and pressured by police.   Several times police  tried to scatter the assembled people.
Representatives from embassies of US, UK and Germany, representatives of European Commission in Baku, OSCE Baku Office 4 specialists exposed to police pressure with the  local right defenders and media representatives.   Probably seeming as a policeman, civil uniformed stranges pressured on people assembled in fornt of the court. They prohibited for Mass Media representatives to access free information.Beeing in Azerbaijan, German ombudsman Gunter Nokke wanted to visit detained youth  in prison but  police didn’t not allow for it.  Sabail District Court Chairwoman Gulzar Aliyeva has agreed to meet with German ombudsman after the intervention of Azerbaijan ombduswoman Elmira Suleymanova. Entering into court building for meeting, Gunter Nokke met accidentally wainting for hearing Emin Milli and his lawyer Elton Guliyev.  Lawyer presented detained youth to the ombudsman and Emin Milli began to speak  about event  in German with ombudsman. But police and court inspectors interrupted their conversation.
Nevertheless they were carried to the court at 18:00, hearing began approximately at 21: 00 and continued  1 hour. Conducted separate hearing for every young. Only lawyers Elton Guliyev and Isakhan Ashurov participated in closed hearing. Sabail District Court Judge Rauf Ahmadov issued a decision to sentence Emin Milli and Adnan Hajizadeh to two months pre-trial detention and to institute a criminal case against them under article 221.1 (hooliganism) of the Criminal Code of Azerbaijan Republic. Alleged attackers Babek Huseynov and Vusal Mammadov have been accepted as injured party; however they did not participate in the hearing.
Emin Milli and Adnan Hajizade were eating out in Livan restaurant in Baku when two people who were seating at the next table and listening to them and who looked like sportsmen attacked and injured them. Sabail DPD detained Adnan Hajizade as a suspected person for 48 hours. Emin Milli decided to show solidarity with Hajizade and asked the police to take him also to detention center.

* STATEMENT OF INSTITUTE FOR REPORTERS’ FREEDOM AND SAFETY