POLICE USE PRESSURE AGAINST JOURNALISTS 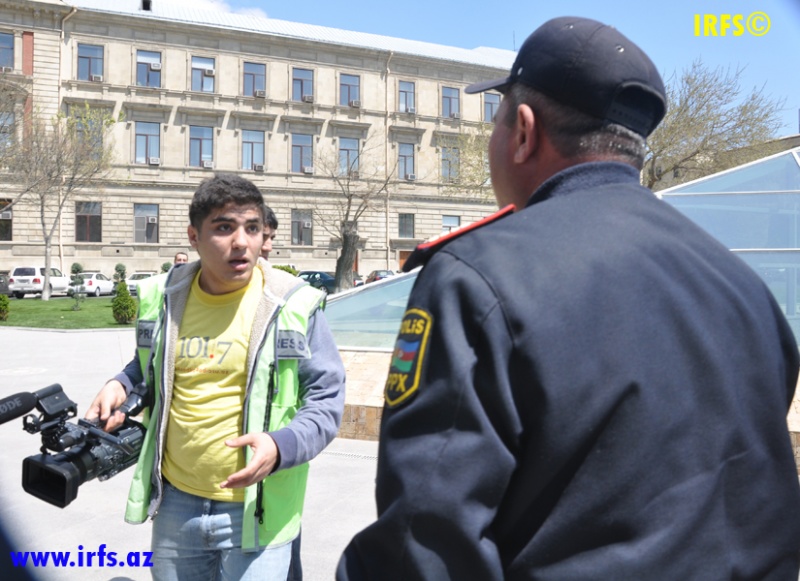 Today, 26 April, journalists faced harassment from police and unidentified plain clothed people during an action conducted by Azadlig bloc in front of Icheri Sheher metro station.
Police and plain clothed people used violent behavior against journalists along with action participants, and did not permit the journalists to fulfill their duties as journalists. Institute for Reporters’ Freedom and Safety representative Mehman Huseynov was among the journalists who faced pressure. A policeman pushed him and hit his video camera. As a result, the camera’s microphone was broken. Then one of the plain clothed persons kicked M.Huseynov as a result of which his leg was hurt.
IRFS notes that although the plain clothed people who used harassment against the journalists claimed that they are regular citizens, it is clear that they are the employees of the Internal Ministry because several of them took part in other actions in police outfit.
Journalist Afgan Mukhtarli told IRFS that he tried to video record the detention of Azerbaijan Popular Front Party Deputy Chairman Nuraddin Mammadli by the police at 11:30 a.m. before the action started when the police used violence against him and broke his photo camera. They took him into a police car and let free in Lokbatan settlement.
More than 50 members of the Azerbaijan Popular Front Party, Liberal Party, Citizen and Development Party (these parties are included in the Azadlig bloc) were detained during the action which was organized to protest against the violation of freedom of assembly. They were taken to an unidentified direction in police cars and on buses that were brought to the site beforehand. Sabail District Police Department Deputy Chief Kamal Valishov told the journalists none of the detained people would be taken to the police department; they would be left free after they were distanced from the area.
However, about 30 people indeed were taken to Sabail Police District Unit #8. In the evening hours IRFS found out that the cases of ten of these people were submitted to court. Internal Ministry Spokesperson Ehsan Zahidov told Radio Liberty that protocol was composed in accordance with the Administrative Errors Code regarding ten people and was sent to court.