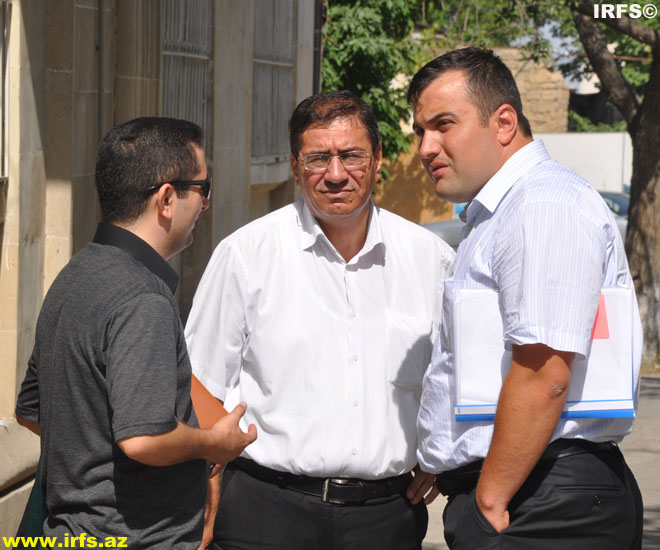 Today, 5 July, in the Yasamal District Court, under the chairmanship of Judge Tahir Ismayilov, a preliminary hearing was held on the special format lawsuit of the Ministry of Internal Affairs Chief Department to Fight against Organized Crimes Head Mirgafar Seyidov against the Lawyers Board member Muzeffer Bakhishov.

The plaintiff’s representatives Alirza Habilov and Mubariz Mammadov, defendant Muzeffer Bakhishov, his lawyers Fakhraddin Mehdiyev, Anar Gasimov, and Mustafa Abbasbeyli, and five members of the Lawyers Board participated in the hearing. All eight lawyers participated in court to show support for their colleague.

Muzeffer Bakhishov said that Mirgafar Seyidov filed the lawsuit in person, and therefore, Mubariz Mammadov, to whom he gave power of attorney to, cannot represent Seyidov under the law because Mubariz Mammadov is an employee of the Ministry of Internal Affairs.

The judge said that the decision regarding the preliminary hearing will be announced on 7 July at 10:00 .am.

The lawsuit stems from an interview Muzeffer Bakhishov gave to Azadlig newspaper on 4 May 2010 regarding the increase of torture cases in Azerbaijan lately, and the special technologies and various torture methods employed widely by the Chief Department to Fight Against Organized Crimes. The Ministry of Internal Affairs Chief Department to Fight Against Organized Crimes Head Mirgafar  Seyidov believed the claims in the interview were defamatory and appealed to court under article 147 (defamation) of the Criminal Code.