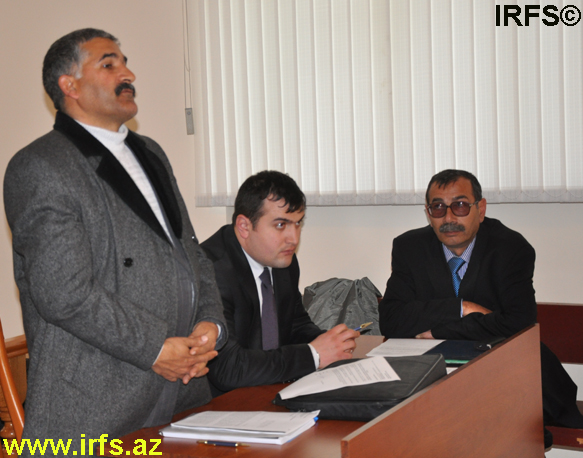 Today, March 29, in the Absheron District Court, under the chairmanship of Judge Shamsaddin Abbasov, a preliminary hearing was held on the case under article 221.3 of the Criminal Code (hooliganism with use of a weapon or weapon-like item) against "Yeni Musavat" columnist and former Editor-in-Chief of “Khalg” Newspaper Mahal Ismayiloglu.

Accused person Mahal Ismayiloglu, his defense lawyers Elchin Sadigov and Alayif Hasanov, and Nasiba Safarova (as injured party) participated in the hearing. Lawyer Hasanov put forth a motion to postpone the hearing claiming that he has just signed a contract with M.Ismayiloglu and therefore has not been able to become familiar with case materials yet.

Although the injured party objected to this, Judge S.Abbasov postponed the hearing until 7 April at 2:30 p.m.

M. Ismayiloglu said that he needs to have a heart surgery in Turkey, however, due to pre-trial detention he cannot leave the country. The judge noted that this will be discussed during the next hearing.

On 27 June 2008, M. Ismayiloglu was called to a police department on the basis of a lawsuit filed against him by his neighbor Vahid Imanov, who works in the Ministry of Interior. In the complaint it is alleged that the journalist beat his neighbor's servant for dumping trash in his yard. Therefore a criminal case on Article 221.3 of the Criminal Code (hooliganism with use of a weapon or weapon-like item) was instituted against M.Ismayiloglu.