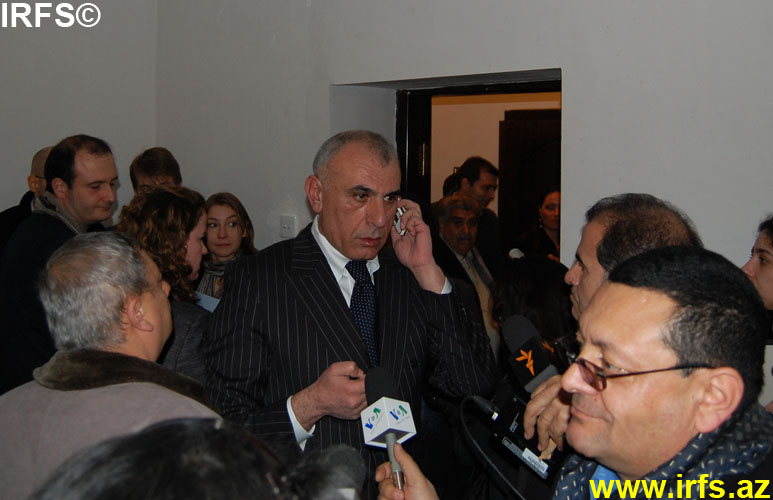 Today, 23 January, in the Nasimi District Court, under the chairmanship of Shahin Abdullayev, a preliminary hearing was held on the lawsuit of Internal Minister Ramil Usubov against the Chairperson of the Institute for Peace and Democracy Director Leyla Yunus.
The plaintiff’s lawyer Alirza Habilov and defendant’s lawyer Isakhan Ashurov participated in the hearing. Indicating that Leyla Yunus’ legal address incorrectly indicated in the lawsuit, Isakhan Ashurov filed a motion. “In fact it is not right to consider this case in the Nasimi District Court since Leyla Yunus’ legal address is in the Yasamal District. The apartment on Shamsi Badalbayli Street, which is indicated in the lawsuit, does not belong to Leyla Yunus, but is registered in Leyla’s husband Arif Yunusov’s name,” said Ashurov. The judge postponed the hearing until 26 January at10:00 a.m. to consider the motion.

An incident happened in the court hall. The judge delayed the hearing for a significant amount of time, saying that he would not start the hearing with people standing in the courtroom. However, there were not enough chairs for everyone. In response to this, the representatives of foreign embassies and international organizations gave up their seats to local people who were standing on their feet. Seeing this, the court supervisors brought two additional benches into the courtroom, but approximately five people were still left without a seat and had to leave the courtroom.

Ramil Usubov filed a lawsuit in the Nasimi District Court against human rights defender Leyla Yunus over libel allegedly committed against the Ministry of Interior during her interview to day.az site. The Minister demands that Yunus refute regarding her interview, apologize to the ministry and pay 100 000 AZN in compensation for moral damages.