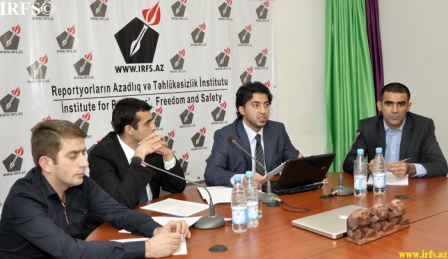 The preliminary report on TV and radio monitoring of the parliamentary elections was presented in the press center at the Institute for Reporters’ Freedom and Safety (IRFS) on October 18th.
Emin Huseynov, director of the Institute for Reporters’ Freedom and Safety, which conducted the TV monitoring, gave some general information on the project. According to Huseynov, these results will help form preliminary opinions about media objectivity. Huseynov said that this the first time that radio stations are being monitored during the election in Azerbaijan, an initiative implemented by the Media Monitoring Institute. Huseynov referred to the banning of foreign radio stations in Azerbajian in January 2009; from this perspective, he said, the radio monitoring is crucial.
IRFS employee Rasul Jafarov spoke about the results of the TV monitoring project. He mentioned that most TV channels are indifferent to the elections. The election-related news items only covered meetings of the Central Election Commission and events held by international watchdogs. There were no discussion and debate programs about the elections. The ruling New Azerbaijan Party (YAP) Chairman, and President Ilham Aliyev received a great deal of positive coverage, while activity by opposition parties/politicians or independent candidates was not broadcasted. Three television channels, ATV, Lider, and Khazar, started a smear campaign against the opposition leader Ali Karimli.

Chief monitorer Rashad Aliyev spoke about the results of the radio monitoring. He said that the radio stations are no better than the television channels, and in some cases, the situation is even worse. According to Aliyev, very little airtime has been given to election issues over the past 10 days. All of the monitored radio stations allocated a significant amount of airtime to the New Azerbaijani Party chairman, President Ilham Aliyev, and showed support for his party. Apart from the ANS station, none of the radio stations broadcasted talk shows on the elections, nor did they broadcast advertisements about the elections. While commenting on the results of the monitoring, Media Rights Institute programme coordinator Khalid Agaliyev said that neither TV channels nor radio stations channels abided by principles of fairness, impartiality and objectivity, and that the prices they charged for airtime are too high. Agaliyev said that in general, the broadcasting media is under government control.
The Media Monitoring of Parliamentary Elections is supported by OSCE Baku Office. The technical support for the project is provided as part of the “Free Airwaves” project financed by European Commission.
http://www.irfs.az/component/option,com_remository/Itemid,32/func,fileinfo/id,34/lang,az/