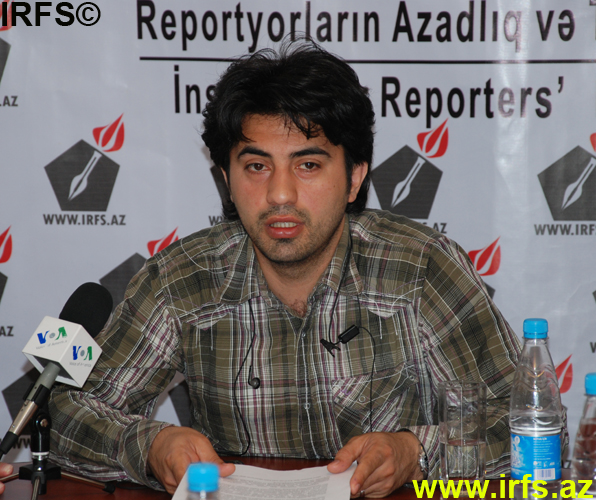 Today presentation of the project “Free Airwaves: Azerbaijan TV and radio broadcasting monitoring and democratic reform initiative” was held in the Press Center of Institute for Reporters’ Freedom and Safety. From March 2009 through January 2011 the Institute for Reporters’ Freedom and Safety, in collaboration with Media Rights Institute, the Holland School of Journalism and MEMO 98 (Slovak NGO) are implementing this project. The project is funded by the European Commission.
The objective of the project is to strengthen two fundamental rights- media freedom and freedom of speech in the broadcast media.
At least 80% of Azerbaijan’s population receives news via the television, but experts believe that Azerbaijan’s TV sector is monopolized and often presents unbalanced reports that violate local laws, as well as internationally recognized ethical norms and standards. In addition, it is often reported that members of the political opposition, minorities, vulnerable groups and people with independent ideas. These tendencies violate both Azerbaijani citizens’ right to free media, in the sense that they are often presented with inaccurate, incomplete and biased information, as well as the right of the political opposition, minorities, vulnerable groups and people with independent ideas to express their views.
Over a period of 22 months, the project will seek to identify violations of existing legislation on TV and radio broadcasting and to promote democratic reforms and freedom of the press and expression as it relates to this sphere. The project will include several parts – a baseline assessment of Azerbaijan’s legislative basis for TV and radio broadcasting, monitoring of TV programming, the compilation of monitoring reports and recommendations for democratic reforms in this area, including legislative innovations (legislative recommendation packets) that could serve to bring the country’s television broadcasting sector into harmony with international standards and help the country to fulfill its obligations before international organizations, and free legal advice and representation on matters related to TV and radio broadcasting.
Today the methodology that will be used for TV monitoring was unveiled, as well as the baseline assessment of Azerbaijan’s legislative basis for TV and radio broadcasting. Copies of these were handed out during the press conference. They are also available on the on IRFS’s website and will be available on the Free Airwaves Project website when the site is unveiled in the near future.