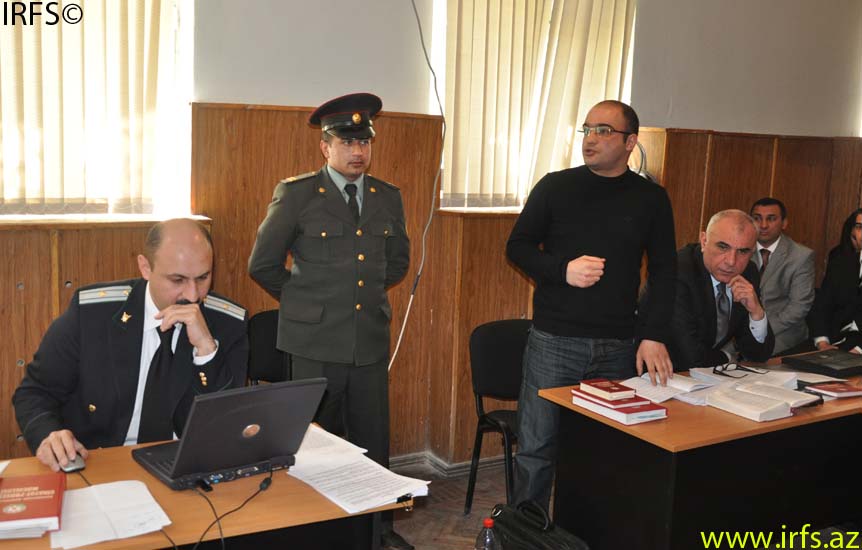 Today, 30 June, in the Garadagh District Court, under the chairmanship of Judge Ismayil Khalilov, a hearing was held on the criminal case against the Editor-in-Chief of Gundelik Azerbaijan and Realniy Azerbaijan Newspapers, Eynulla Fatullayev.

State Plaintiff Elchin Nagiyev spoke first during the hearing. He said that Fatullayev was a danger to the public and there are no elements in his case that would reduce the seriousness of his case. Therefore Nagiyev said that Fatullayev should be convicted under article 234.1 of the Criminal Code (Illegal purchase or storage narcotics or psychotropic substances in an amount exceeding necessary limit for personal consumption and not intended for sale), and should be sentenced to three years of imprisonment. The prosecutor said Fatullayev should serve his term in a special regime prison.

Next, Fatullayev’s attorney Isakhan Ashurov spoke. He said that he did not expect a just and fair decision from this court. “The outcome of this hearing has been sketched in various offices, not here in court,” said Ashurov. The lawyer talked about various violations of Fatullayev’s rights. He said that an operational search should be conducted without court order only when it is urgent. However, this search was conducted without a court order and the journalist was not given an opportunity to contact his lawyer.

At the end of his speech, I.Ashurov asked the court to exonerate E. Fatullayev and inform relevant agencies and government entities about the illegal actions of the Chief and employees of Prison #12.

Fatullayev stated that this trial should have ended after Prison #12 Prison Chief spoke as a witness. In his speak, the prison chief said that narcotics could be planted in Fatullayev’s clothing or the journalist should even be strangled in prison. According to Fatullayev, this testimony confirmed that the charges against him are false.

In closing, Fatullayev said that Chief Prosecutor Zakir Garalov insulted him by calling him a drug addict before the culmination of the this trial and he intended to sue Garalov.

The trial is scheduled to continue on 1 July at 2 p.m., when E. Fatullayev will make his closing statements.

Many local and international observers were present at the trial today, including former OSCE Special Representative for Media Freedom Miklos Haraszti.

The European Court of Human Rights issued a decision regarding the case of imprisoned Editor-in-chief of Gundelik Azerbaijan and Realniy Azerbaijan newspapers Eynulla Fatullayev. The decision states that the journalist should be released immediately and the Azerbaijani government should pay 27,822 EUR to Fatullayev in compensation.

INSTITUTE FOR REPORTERS’ FREEDOM AND SAFETY APPEALS TO HILLARY CLINTON