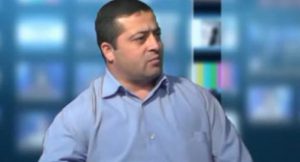 The judicial investigation in journalist Elchin Ismayilli’s case has been completed, as reported by lawyer Elchin Sadigov. At a hearing on the case held in Shaki Grave Crimes Court under the chairmanship of Judge Rashid Huseynov, a man by the name Ilgar Garibov was questioned as a victim. He told the court that Elchin Ismayilli had not demanded from him money and that the journalist had occasionally complained to him of livelihood hardships. After Garibov’s testimony, Elchin Ismayilli filed a motion to summon Azerbaijan Popular Front Party (APFP) Chairman Ali Karimli to the court. “Ali Karimli’s name is also mentioned in the indictment bill. Allegedly, I have acted on Ali Karimli’s instructions. But this is a lie. I have no relation to Ali Karimli. I have only attended party meetings,” said the journalist in protest.
However, the jury did not grant the motion.
Next, a secret recording of a meeting between Elchin Ismayilli and Azer Abbasov, who had served as the head of Ismayilli Culture and Tourism Department until October 2016, was displayed in the courtroom.
Elchin Ismayilli’s lawyers argued that the video had been edited, as their client’s words at the meeting and in the conversation with the State Security Service (SSS) employees during the operation had been cut out. They asked for the recording to be removed from the list of evidence. The lawyers noted that the video had been manipulated and falsified.
The jury, however, denied the motion and announced the completion of the judicial investigation.
After that, the public prosecutor made a speech and asked the court to sentence Elchin Ismayilli to 10 years in jail.
Following the prosecutor’s speech, Elchin Ismayilli’s lawyers asked the court to give them time for closing arguments. The court granted them time until 15 September for preparation.
Elchin Ismayilli was arrested in February 2017. He is charged under Articles 182 (extortion) and 308 (abuse of power) of the Criminal Code.
According to his lawyer, head of Ismayilli Regional Executive Power Mirdamad Sadigov has also been interrogated by the investigative agency. “The indictment bill has his name on the list of witnesses to be questioned in court. At the previous hearing, the judge asked the lawyers whether there was a need to question Mirdamad Sadigov, and the defence counsels stated that he definitely had to be summoned to the trial, as his investigation statement should not be deemed sufficient because of strong contradictions between his statement and victim Abbasov’s account given in court, and those contradictions needed to be clarified. Nevertheless, the judges did not summon the executive power head or question him in court,” the lawyer said.
Previous Post