PROTEST ACTION CONDUCTED IN FRONT OF AZERBAIJAN`S EMBASSY TO USA 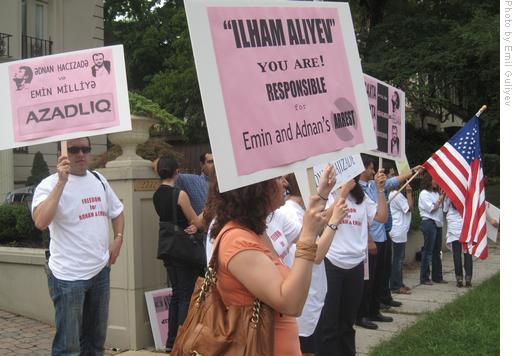 On 28 August, a protest action was conducted by American Azerbaijanis for Democracy Organization in front of Azerbaijan`s Embassy in Washington. According to “Voice of America” radio, 40 people participated in the action to protest the arrest of young bloggers Emin Milli and Adnan Hajizade.
Among participants there were university fellows of Adnan Hajizade, who graduated from Richmond University, members of Azerbaijan community and several Americans.
Washington Representative of Reporters Without Borders and several press representatives took part in the protest action. The demonstrators began the action with National Anthem, and chanted slogans “Freedom for Emin and Adnan”, “No to Unfair Court Trials”, “No to Police Injustice”, “Freedom to Imprisoned Journalists” and waved flags of  Azerbaijan and  America.
Then Reporters Without Borders Representative Clotilda Lekoz read a statement on behalf of the organization. In the statement Azerbaijan’s government was called to immediately release young bloggers Emin Milli and Adnan Hajizade including other imprisoned journalists.
Clotilda Lekoz told “Voice of America” that the arrest of Emin Milli and Adnan Hajizade is not the first incident of this kind. “Their arrest is believed to be politically motivated,” said the representative.
One of the organizers Elmar Shakhtanski said that the main reason of holding this action is to demonstrate support for freedom of speech in Azerbaijan. At the end of the action activists’ statement was introduced to Azerbaijan’s embassy.
On 8 July, at approximately 8:00 p.m., Emin Milli and Adnan Hajizade were sitting at a table in “Lebonese” (Livan) restaurant along with several other young adults, when two people that looked like sportsmen came up to them, and attacked them causing physical injuries. Although they appealed to police as victims, police detained Adnan and Emin as suspected persons for 48 hours and freed the attackers. On 10 July, Sabail District Court issued a decision under article 221.2.1 (hooliganism) and of the Criminal Code to sentence Emin Milli and Adnan Hajizade to two months pre-trial detention. On July 20 the Appellate Court upheld the decision of the lower court. Investigation of the criminal case was concluded and a criminal case under articles 221.2.1 (hooliganism) and 127 (inflicting intentional minor bodily harm) was instituted against E.Millli and A.Hajizade and the case was sent to court to be considered.
Previous Post