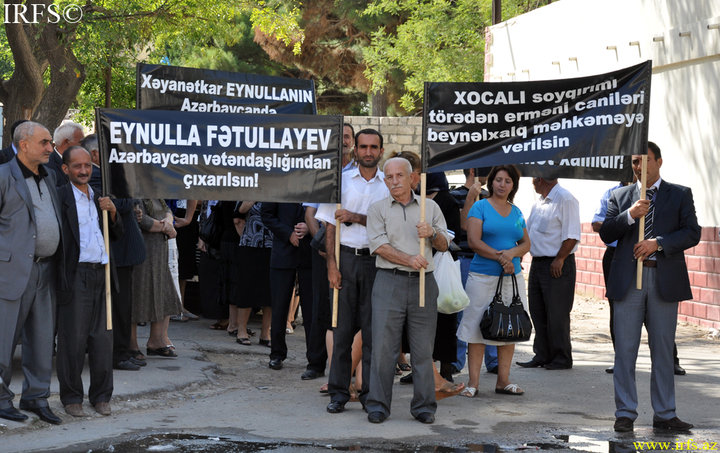 On the 17 September, a youth group calling themselves refugees staged a protest in front of the Baku Court of Appeals, where Eynulla Fatullayev`s appeal hearing is being conducted.
They held posters with slogans “Dashnak spy Eynulla Fatullayev insulted the spirits of martyrs” and “Eynulla Fatullayev should be stripped of his Azerbaijani citizenship”.
The protesters accused Fatullayev of slandering the Khojali tragedy. “We are against release of Fatullayev,” a protester said.
Police did not interfere with the action. The protest is suspected of being a set up by the government.
The journalist appealed against the 6th of July decision of Garadagh District Court of his 2.5 years imprisonment under the accusation of storing drugs, and demanded his immediate release.
In 2007, Fatullayev was sentenced to 8.5 years in jail for threatening terror and other accusations. However, the European Court on Human Rights issued a declaration of his innocence and immediate release. The Azerbaijani government has been refusing to execute this decision.
Previous Post

ADNAN HAJIZADE’S REQUEST TO PARTICIPATE IN NEXT HEARING FULFILLED