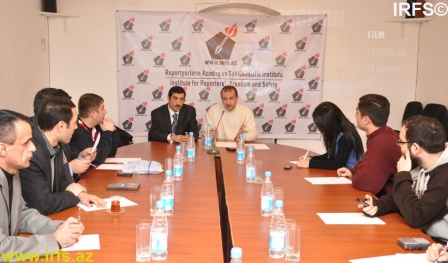 Today, 4 February, in the press center of the Institute for Reporters' Freedom and Safety, at the initiative of “Free Speech Revolutionaries” (FSR) “Sechilen” (“Chosen”) film was viewed and a discussion was conducted about the film.   ANS Company Groups Head Vahid Mustafayev is the author of the film. FSR club co-founder Parviz Jabrayil said that their aim was not “to knock down” the film, but conduct a critique from the perspective of the press.
“When watching the film, one would believe that Azerbaijan has no professional police, border service and military personnel,” said P.Jabrayil. “Even the president’s personal guards consist of boys simply wearing black glasses, earphones and black suits, who pose for fashion looking here and there.”

FSR club’s other founder Eldaniz Elgun noted that taking sides in this genre films is not right, but in “Sechilen” (“Chosen”) preference for the incumbent government is clearly seen. Journalists have been depicted as traitors in the film and this is troublesome, added E. Elgun.

“Khural” Newspaper Editor-in-Chief Avaz Zeynalli said that the film looks like propaganda. “Internal groupings in Azerbaijan have been shown in ’Sechilen’ (’Chosen’) film. These films are harmful for Azerbaijani Society and it is a 93-minute advertisement,” according to Avaz Zeynalli.

Journalists and civil society figures also mentioned that “Sechilen” (“Chosen”) film has been shot on the basis of one-sided information, and processes intended to confuse people have been demonstrated in the film.

This film, which was produced by ANS Company Groups Head Vahid Mustafayev, talks about an attempt by Armenian authorities to assassinate the President of the Republic of Azerbaijan Ilham Aliyev. It is also noted in the film that a scientist who is an opposition member and “Azeri Sesi” newspaper’s (which is published by the financial help from Armenians) Editor-in-chief Beydulla Fatullayev assisted in this terror act.