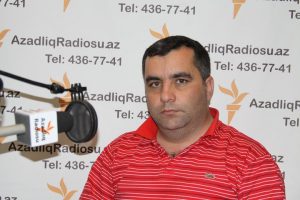 Yafez Akramoglu, correspondent of Azadliq Radiosu/Radio Liberty in Nakhchivan, alleged on April 6 that he is being victimized in a blackmail attempt.  Akramoglu made the allegations after receiving a letter containing photographs of a naked woman, copy of Facebook chat and a CD of the intimate nature.   “The next day an unknown man called me and introduced himself as a representative of Nakhchivan’s Ministry of National Security (MNS). He acknowledged the  package was sent by his Ministry and demanded me to stop preparing negative materials about Nakhchivan. He even offered money, but I refused to take it” said the journalist at the press conference in the IRFS press center on April 6 .

The journalist stressed that the Nakhchivani authorities are worried over his journalism as all his stories deal with human rights violations and power abuse committed by local government.

“If anything happens to me or my family the responsibility will lie with Nakchivani authorities”, declared journalist.The editorial office of Azadliq Radiosu/Radio Liberty has already appealed to the Azerbaijani Interior Ministry, General Prosecutor’s Office and Ministry of National Security in connection with the case.

In her turn, investigative journalist Khadija Ismayilova said that the Azerbaijani Interior Ministry, General Prosecutor’s Office and other relevant agencies will also bear responsibility if they fail to ensure the journalist’s and his family’s safety.