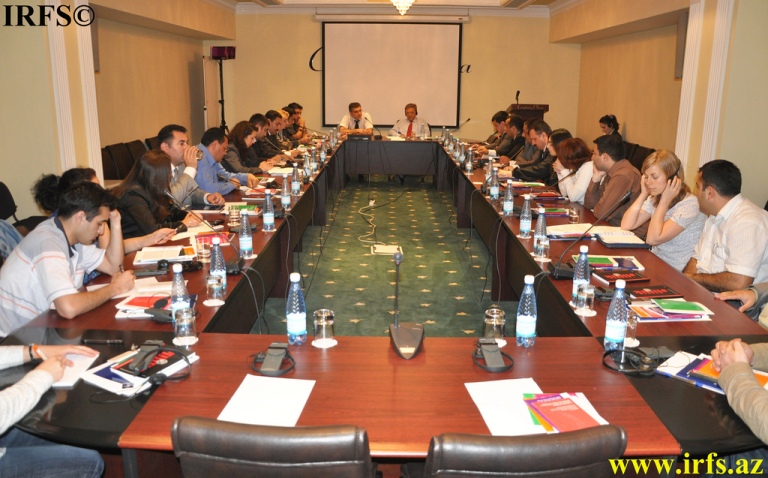 Today, 25 May, the United Nations Organization Supreme Commissariat Representation on Human Rights in Azerbaijan presented recommendations prepared by the UN Committees regarding the reports of Azerbaijani Government. Representatives of state organs, NGOs and international organizations participated in the event.
It was noted during the event, that in 2009, the Azerbaijani government presented periodic reports to the UN Human Rights Committee, the Committee against Tortures, the Committee on the Elimination of Discrimination against Women, the Committee on the Elimination of Racial Discrimination, and the Committee to Protect the Rights of All Worker Migrants and their Relatives. Members of Committee prepared final suggestions after discussions they held with NGO representatives presented alternative reports to government representatives and committees.

The participants conducted discussions on the recommendations; and they noted that it is necessary to implement them.   Institute for Reporters` Freedom and Safety Chairman Emin Huseynov said that he wants to meet with imprisoned journalists; however his appeals have not been responded to for a long time.

He emphasized that allowing the members of the Public Committee under Penitentiary Services only to conduct monitoring in prisons is discriminative against other human rights defenders.

Eight human rights organizations included in the South Caucasus Network of Human Rights Defenders (the Law Education Society, the Institute for Reporters’ Freedom and Safety, the Media Rights Institute, the Society for the Defense of Women’s Rights named after Dilara Aliyeva, the Institute for Peace and Democracy, the Humanitarian Research Society, the International Students Cooperation Public Union, and the Assistance to Free Economy Public Union) submitted an alternative report to the UN Committee on Human Rights and the Committee against Torture in July and November last year.