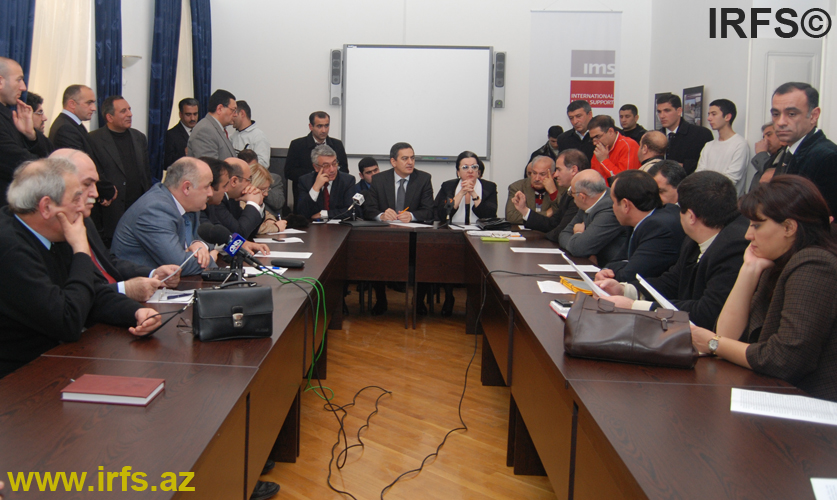 Today, 9 January, at the initiative of “Azadlig” bloc and “Azerbaijan Namine” Public Forum, opposition parties and NGO leaders conducted an event in connection with referendum scheduled to take place on 18 March.
APFP Chairman Ali Karimli said that “Azadlig” bloc prepared a document for Azerbaijani opposition to be united in “Movement for Republic” propaganda group during 18 March referendum. Karimli stated that this referendum is intended to remove the ban on the terms one person can be elected as a president and is also directed to restrict the work of independent media. He proposed all event participants to join in the propaganda group.
ADP Chairman Sardar Jalaloglu, Umid Party Chairman Igbal Agazade, Head of the Institute for Peace and Democracy Leyla Yunus agreed to this proposal. Musavat Party Leader Isa Gambar was for acting together, however, he was against the propaganda group.
Then discussions went on without participation of the journalists. Head of the Institute for Peace and Democracy Leyla Yunus gave information to the journalists about the results. She said that the event participants adopted a decision to create “Civil Movement for Karabakh and Democratic Republic”. “I have been elected the chairperson of the coordination council of this movement,” said Leyla Yunus. “Creating one or more propaganda groups within the movement will be specified until 13 January.”
Previous Post