REPORT ON AZERBAIJAN HEARD IN UN COMMITTEE AGAINST TORTURE 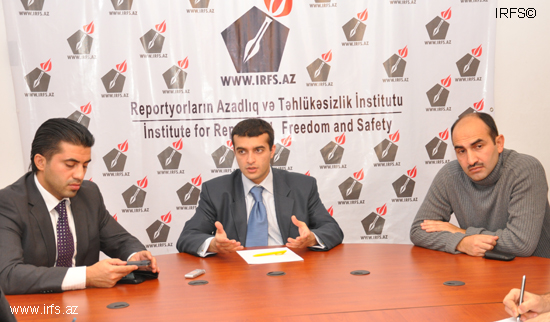 Today, 13 November, in the press center of the Institute for Reporters` Freedom and Safety (IRFS) a press conference was held concerning a report on Azerbaijan conducted in the 43rd session of the UN Committee against Torture.
IRFS Chairman Emin Huseynov said that an alternative report on Azerbaijan was prepared by the organizations that are included in the South Caucasus Network of Human Rights Defenders, and this was voiced during the session by IRFS representative Rasul Jafarov.
IRFS representative Rasul Jafarov expressed his gratitude to the Open Society Institute Support Fund and Human Rights House Foundation Geneva Office for financial and technical aid for his participation in the session. He said that the third periodic report presented by Azerbaijani government did not cover the major issues completely. A lot of questions were raised regarding the report submitted by the government. The questions regarding the failure to punish any police employees on torture facts, not providing medical aid to young bloggers, failure to provide medical assistance to “Tolishi Sado” Newspaper Editor-in-chief Novruzali Mammadov and for this his death in prison, and regarding Faina Kungurova`s death that were addressed to the representatives of the government remained unanswered.
Rasul Jafarov noted that serious recommendations and decisions on Azerbaijan will be adopted.
Democratic Institutions and Human Rights Organization Head Elchin Abdullayev said that the alternative report on Azerbaijan prepared by the representatives of the Civil Society representatives does not reflect reality.