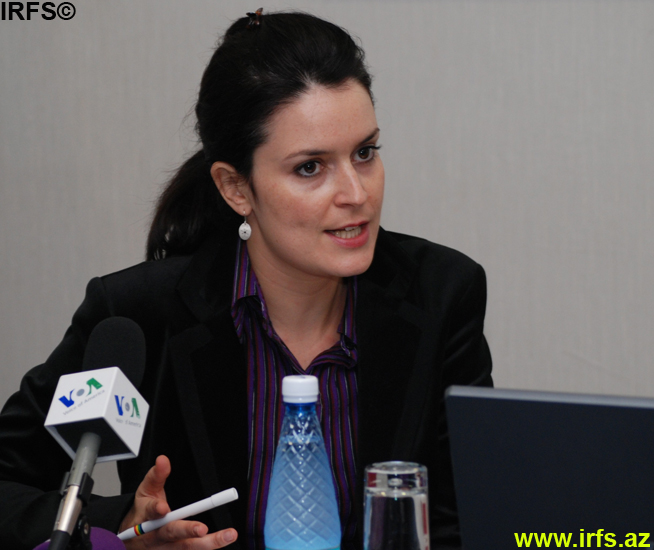 Today (14 October), in the Park Inn Hotel, Reporters Without Borders unveiled its media monitoring results on the 15 October presidential election.
According to the Head of the Mission Elena Chernyavskaya, the monitoring was carried out on AzTV, Public TV and ANS TV channels, Azerbaijan State Radio, and Public Radio, “Respublika”, “Khalg”, “Azerbaijan”, and “Bakinskiy Rabochiy” newspapers.

The monitoring is part of a comprehensive "Media pluralism in the electoral period" project that is co-financed by the European Commission, according to Elsa Vidal, the of Reporters’ Without Borders Former USSR Department.

“The electorate couldn’t receive broad information about political choice which could be helpful other than free programs and free space in the newspapers,” said Vidal, adding that Reporters Without Borders’ monitoring team monitored news and current affairs programs, including talk shows on social and political subjects on radio and television between 3 p.m. and 10 p.m. every day. In the print media, the team monitored all articles related to news and current affairs in Azerbaijan.

“The team came to the conclusion that there has been a shift in the news and current affairs coverage in the last two weeks of the campaign, with more reports allocated to the electoral preparation and to the activities of the candidates. However, the media failed to take a pro-active role in analyzing the candidates' track records, asking different questions and comparing their platforms. The coverage of the opposition parties boycotting the election was insignificant. Paid air envisaged in the CEC regulations was used less.”

The TV channels allocated overwhelmingly more coverage to the incumbent president, according to Vidal. For instance, AzTV allocated 44.14% of its airtime to the president and 68.84 % of was direct speech of Ilham Aliyev.

After this commentary, Chernyavskaya and Vidal answered questions from journalists.

GANIMAT ZAHID AGAINST HIS DISEASE BEING TURNED INTO TRAGEDY