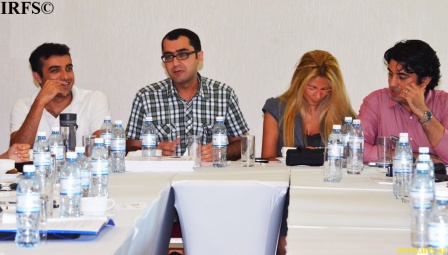 With support from National Endowment for Democracy (NED) and International Media Support (IMS), Expression Online initiative continues to raise the flag for the issues related to internet freedom in Azerbaijan.
As part of initiative, some 30 NGO and media representatives cyber crime civil society and media experts come together to participate in July 31 roundtable:“Critical voices online: cyber security for human rights defenders and media”.
The Expression Online Initiative is a consortium of three freedom of expression organizations including Institute for Reporters’ Freedom and Safety, the Human Rights Club and Azerbaijan Media Center. According to Human Rights Club head Rasul Jafarov, the goal of the campaign is to develop best practices and promote informed public dialogue for advancing internet access and freedom in Azerbaijan..
Gulnara Akhundova, IMS Program Manager chaired the meeting. Co-moderated by Akhundova and prominent Azerbaijani blogger, the event stressed the need for a holistic approach to internet freedom.
According to IRFS chairman, Emin Huseynov cyber security is an issue of everyone’s concern. Huseynov believes majority of attacks could be stopped if people followed security practices.
There is a great need for cyber security education and training, said Azer Hesret, ICT expert.
The forum also focused on persecution of online critical voices, and specifically increased hacker attacks on the website of Azadlig newspaper during past two years.  According to Azadlig newspaper editor Rahim Hajibeyli, attacks on the newspaper website come from the Ministry of Communications and Information Technologies. The government increasingly seeks to regulate and restrict the free flow of information on the Internet.
According to ARTICLE 19 representative Rebecca Vincent, there have been reports of blocking and filtering of critical websites in Azerbaijan at crucial and sensitive political moments, including allegations that these measures occurred following informal communications between state agents and ISPs. Vincent deemed it as a pressure on the freedom of expression. International human rights standards stipulate that mandatory blocking of a website should always be ordered by a court and should always be limited in scope.
The state should equally react to attacks on government and private websites, believes Media Rights Institute Director Rashid Khajili. "If a cyber attack on the site of state agencies is regarded as a crime, the same should apply to private sites as well" Khajili said

Blogger Ali Novruzov focused on the problem of fake accounts created in social networking websites.
The representatives of the Ministry of Communications and Information Technologies did not attend the event.