RESULTS OF TV MONITORING REGARDING FIRST SIX MONTHS OF 2010 UNVEILED 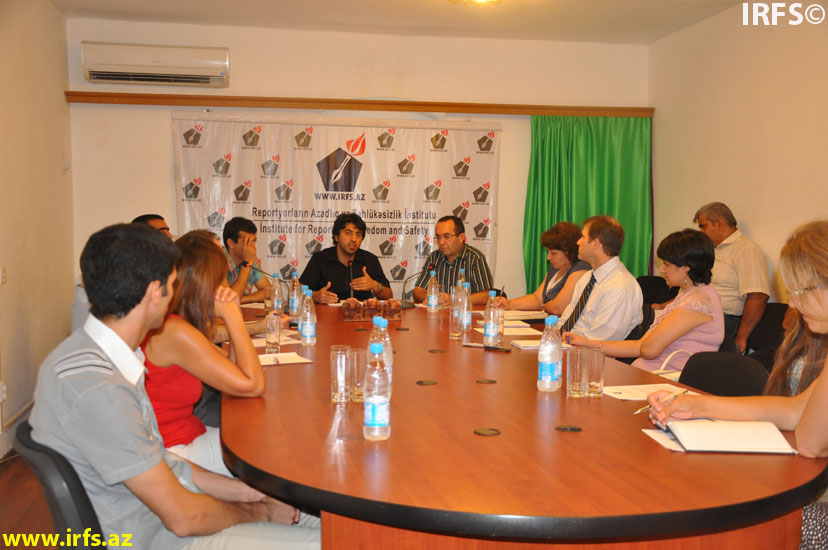 Today, 29 July, in the press center of the Institute for Reporters’ Freedom and Safety (IRFS), an event was conducted within the framework of the “Free Airwaves” project that is being implemented by IRFS and the Media Rights Institute (MRI).

IRFS chairman Emin Huseynov talked about the project. “The Institute for Reporters` Freedom and Safety (IRFS) has been monitoring eight TV channels in Azerbaijan (AzTV, Ijtimai TV, Idman-Azerbaijan, ATV, ANS, Lider, Space, Khazar) since May 2009,” said Huseynov. “To obtain information about the monitoring and its methodology, you may go to www.tv-radio.az website. On the website you may familiarize yourself with the monthly reports in the “Monitoring Reports” section. These reports cover the results of the monitoring for the first 6 months of 2010.” Huseynov then noted that a draft law on the regulation of TV and radio broadcasting sector had been prepared by MRI.

Project coordinator Rasul Jafarov talked about the report and stressed that the results of the monitoring discovered negative trens.

“Both state funded and private TV channels showed negative trends throughout the monitoring period,” said Rasul Jafarov. “This indicates that these TV channels are being controlled by one soure –the government. The TV channels work under pressure. When it comes to covering political figures, the government officials receive overwhelmingly more coverage. In addition, that coverage is mostly positive. Azerbaijan’s President, the ruling New Azerbaijan Party (YAP) chairman, I.Aliyev, is given both extensive and positive coverage. With AzTV (which is financed by tax payers) leading, all the TV channels promote I.Aliyev. The broad and positive coverage of the late President Heydar Aliyev, who passed away in 2003, in addition to President Ilham Aliyev, denotes a cult of personality. H.Aliyev’s picture was placed at the top corner of all TV channels during holidays celebrated in Azerbaijan, including: New Years, 8 March, 9 May (Victory Day), 20-21 March (Novruz holiday), 28 May (Republic Day), 15 June (Revival Day), and 26 June (Army Day), and on 10 May which was his birthday. The TV channels do not allow criticism of the authorities. People represented by the authority and those participating directly in the management of the state were not criticized. Critical elements were observed on private television channels ANS and ATV. However,when the subjects (executive administration and local executive representatives) were criticized, it was often not specified who the person being criticized was.”

Jafarov then added, “Another trend is that the opposition and independent politicians are not given coverage.  People who want to introduce an alternative policy to the government’s policy regarding government management, socio-political, or economic issues are not given the opportunity to express their opinions.  Although several television channels (Public TV, ANS, ATV) give coverage to these people, they are entitled to express opinions regarding issues that are of no public importance.”

MRI head Rashid Hajili stated that the National TV and Radio Council (NTRC) is completely dependent on the government and this creates problems in the broadcasting sector. “We prepared a draft law, Regulative Organ in the Broadcasting Sector: Independence, Organization, Authorities and Financing,” said Hajili. “It will be presented to the public for discussion. After all suggestions are considered and changes made, it will be submitted to the Milli Mejlis.”