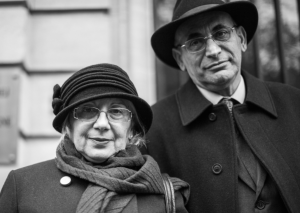 ➢ The public prosecutor wants the Netherlands-based Yunus to participate in the proceedings;
➢ Lawyer Elchin Sadigov believes that the court intends to declare the Yunus wanted.

On 19 April, Baku Court of Appeal started the review proceedings on the appeal in the case of Leyla Yunus, the director of the Institute for Peace and Democracy, and her husband Arif Yunus. The Yunus, who currently are out of the country, did not participate in the hearing presided over by Judge Mirpasha Huseynov.

According to lawyer Elchin Sadigov, the Yunus had appealed Baku Grave Crimes Court’s judgment dated 13 August 2015. Due to the absence of any protest to the judgment on the part of the prosecutor’s office, the appeal court cannot aggravate the punishment. He, therefore, stressed the admissibility of considering the appeal without the participation of the Yunus themselves.

The lawyer lodged a motion to serve the defence with copies of roughly 300-page-long documents in the case file.

Abbas Abbasli, the prosecutor defending the state prosecution, did not object to the motion for the copies of the documents to be served upon the lawyer. However, he wanted the appeal proceedings to be held with the participation of Leyla and Arif Yunus. Abbasli noted that the Supreme Court had revoked Baku Appeal Court’s decision, referred the case back to the stage of appellate review, and underlined the importance of hearing the appeal through judicial investigation. The prosecutor stressed that judicial investigation if there would be any, necessitated the participation of the appellants in person.

The jury did not comment on the issue of the Yunus’ participation but granted the motion requesting that copies of the documents be served upon the lawyer. The hearing will continue on 3 May.

After the hearing, lawyer Elchin Sadigov said the court intended to declare the Yunus wanted. He noted that, although the appeal with the Supreme Court had been filed by the defence, the grounds mentioned in the revocation decision were accusatory. “In other words, the appellate court’s decision has been repealed on the grounds that are not in favour of the defence. Despite the absence of an appellate complaint or protest against Leyla and Arif Yunus, I believe that the court plans to, unlawfully so, declare them wanted. Moreover, the Supreme Court’s decision does not directly state ‘judicial investigation shall be conducted’, contrary to the prosecutor’s allegation. I regard the pretext of ‘judicial investigation’ as an attempt to declare Leyla and Arif Yunus wanted,” the lawyer noted.

Separate proceedings were also initiated against both of them under Article 274 (treason) of the Criminal Code.

In December 2016, Baku Appeal Court annulled the judgment, commuted the Yunus’ imprisonment to conditional sentences with 5-year probation, and released them. They eventually left the country and went to the Netherlands.

Baku Appeal Court’s decision on the release of the Yunus under conditional sentences has recently been repealed by the Supreme Court, and the case has been referred back to the appeal court for reconsideration.