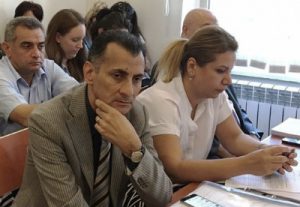 ➢ The Supreme Court upheld the court decisions on the rejection of the appeals filed against the termination of ANS TV’s and Radio’s activities.

On 19 April, the Supreme Court considered the appeal concerning the termination of ANS’s activities.

At the hearing, ANS’s representative Sevda Maharramova said the National TV and Radio Council (NTRC) had not had the authority to suspend the television channel’s broadcast at its own discretion. According to her, the lower instance courts had also failed to properly apply the laws while issuing a decision on this matter. On that ground, Maharramova asked the court to overturn Baku Appeal Court’s decision.

ANS’s lawyer Fuad Agayev made a speech regarding the appeal related to ANS CM Radio. He noted that although the reason cited for the cancellation of ANS TV channel’s license was unlawful, at least the NTRC referred to something in its decision. “But there is absolutely nothing concerning the radio. They have written that ANS CM had been fined for some administrative offences 7-8 months prior to this decision, whereas those offences themselves are also suspicious. It also means that ANS CM is repeatedly punished for the same offence,” the lawyer said and underlined that it constituted a violation of Article 7 of the European Convention.

The panel of judges chaired by Azer Huseynov denied the appeals.

Background: On 18 July 2016, the NTRC invalidated the special permit (license) granted to ANS CM, suspended ANS Independent Broadcasting and Media Company’s broadcast for a period of one month, and appealed to the court to terminate the license. On 29 July 2016, Baku Appeal Court granted the appeal at a hearing chaired by Judge Ulvi Mayilov, and the television channel’s license was revoked.

The present cassation appeal had been filed against the NTRC’s one-month suspension decision and the dismissal of the appeals against the cancellation of ANS CM Radio’s license by lower courts.

Note that the reason for ANS’s closure was its reporter’s interview with Fetullah Gulen, a US-based Turkish cleric accused of a coup attempt in Turkey. Although the interview conducted by ANS’s US-based correspondent Ganira Atashova was not aired, the NTRC adopted the above-mentioned decision on the television channel. In a statement, the NTRC assessed the channel’s action as promoting terrorism.