ROUNDTABLE CONDUCTED ON THEME OF “BLACK SMEAR CAMPAIGN IN MASS MEDIA: HOW IS MEDIA ATTENDING ELECTIONS?” 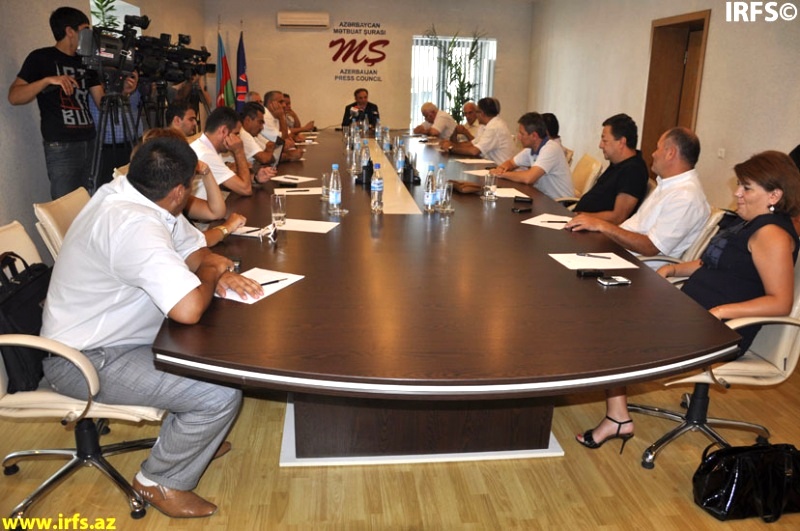 Today, the 17th of August, in the Press Council, a roundtable was conducted on the theme of “Black smear campaign in mass media: how is media attending elections?”

Press Council chairman Aflatun Amashov said that conclusion of monitoring shows that “black smear” campaign increased in mass media in the summer months. He emphasized that  articles regarding insulting honor and dignity and black smear campaign are published in the press.

Azerbaijan newspaper editor-in-chief Bakhtiyar Sadigov said that “black smear” campaign in Azerbaijani press is cause for concern.  He said that unpleasant expressions were used during the discussions in media regarding “Unhappy Man” filmed by Mirshahin Agayev about Eynulla Fatullayev.  Sadigov emphasized that black smear campaign is used on the eve of election and he called upon press not to allow such cases in the elections to be held in November.

Democratic Journalists League Chairman Yadigar Mammadli said that black smear campaign is a method used all over the world and this is very normal.  He added that it is not black smear campaign in the Azerbaijani press that is being conducted during the election. They are using insult and defamation and conducting disgracing campaign. Mammadli called upon newspapers to sign treaty not to allow such cases.

Yeni Musavat newspaper Deputy Editor-in-chief Azer Aykhan said that situation regarding election is silent and intensification is not observed.  He also said that there is no need to conduct such case. Azer Aykhan`s opinion regarding proposal to enter into agreement  was not positive.  He said that this will not be effective and he emphasied that newspapers are free to publish some information that is interestting for people.