ROUNDTABLE HELD ON THE THEME OF “ISLAM AND MEDIA: PROBLEMS AND PERSPECTIVES” 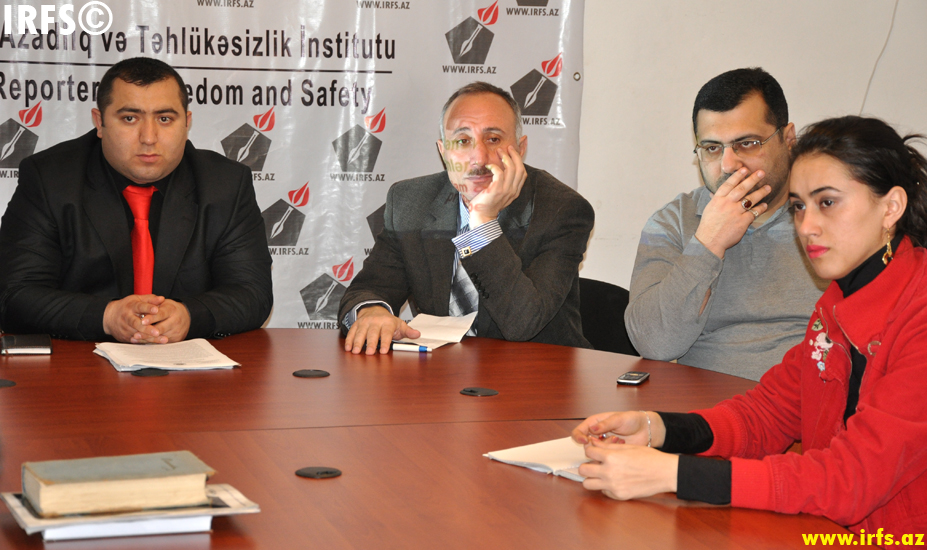 Today, 9 April, in the press centre of the Institute for Reporters’ Freedom and Safety (IRFS) a roundtable was held on the theme “Islam and Media: Problems and Perspectives,” by “New Time” Analytic Information Agency.
“New Time” Head Agil Alasger said that serious an insulting tendency is shown in Islamic accounts, in written and electronic Mass Media. A.Alasger emphasized that there is a very serious plan behind this issue, expressed by the hazardous activity of several people. He also pointed out that connecting successful and important figures in society with the religion of Islam is not covered effectively, and expressions like “Christian terror,” “Jewish terror,” and “Buddhist terror” are not being used in the media.
“Oguz” Independent Research Group Head Vugar Zifaroglu said that the attitude for Islam religion changed after 11 September accidents and there are opinions that Islam is a threat to western society. He stressed that there are wide spread articles in the western media that incite religious and racial conflicts, and this is unacceptable.
Defense Center for Religious Faith and Freedom of Conscience Head Haji Ilgar Ibrahimoglu pointed out that a tension arose regarding this problem in the public environment of Azerbaijan several years ago; and subsequently this work was carried out by the order. Haji Ilgar noted that such controversial matters draw attention from serious problems in the country, and these problems usually happen before elections.
“Presspost” News Portal Editor-in-chief Nigar Almangizi said that there is a gap regarding the religion coverage in Azerbaijani media, and the reason is that these articles are written by people who are not related to the religion.
Previous Post