Rules Being Laid Down for Conducting Parliamentary Meetings Behind Closed Doors 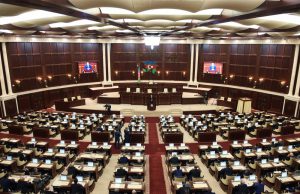 > According to the amendment, a meeting of the session of Milli Meclis (Parliament) can be held behind closed doors if so required by 83 MPs or at the suggestion of the President of Azerbaijan Republic.

Rules for conducting closed parliamentary sessions are being defined in the amendments to be introduced to the Internal Regulations of Milli Meclis. The new proposed wording of Article 3 is as follows: “In line with Part IV of Article 88 of the Constitution of the Azerbaijani Republic, a closed meeting of a Milli Meclis session can be held if so required by 83 MPs or at the suggestion of the President of Azerbaijan Republic.”

Note that, although the current version of Article 3 of the Regulations provides information about closed meetings, it lacks the procedure for conducting them. The currently effective wording of this Article is as follows:

“A meeting of Milli Meclis is competent if attended by 83 MPs. Meetings of Milli Meclis are held in an atmosphere of openness and transparency and are covered by the mass media.

This decision is adopted in protocol procedure.

… During open meetings, representatives of mass media outlets registered with Milli Meclis are allowed into the meeting room to sit in the seats designated for them.”

The bill has been recommended for a plenary meeting at a joint meeting of the Human Rights Committee and the Legal Policy and State Building Committee of Milli Meclis on 20 April.

It should also be noted that, although the amendment to the Internal Regulations determines the cases where closed meetings will be conducted, it does not nail down reasons for these cases.