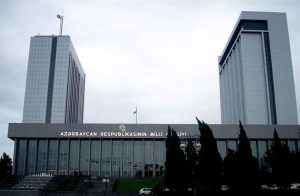 According to this Article, the President of Azerbaijan may dissolve Milli Meclis in the following cases:

* When the same convocation of Milli Meclis shows lack of confidence in the Cabinet of Ministers twice within one year;

* The candidates (members of the Constitutional Court, the Supreme Court and the Board of Management of the Central Bank) nominated by the President of the country are not appointed within the period prescribed by law after being presented twice;

* In the event of failure to perform the duties stipulated in the Constitution such as general rules established by Milli Meclis, issues resolved by Milli Meclis, the right of legislative initiative of Milli Meclis and the deadline for submitting laws for signature, due to reasons that cannot be eliminated.

Besides, a provision in the Regulations concerning divestment of the deputy mandate and powers, i.e. the Article regarding the Disciplinary Commission of Milli Meclis is also being changed. According to the amendment, the Disciplinary Commission of Milli Meclis functions for the purpose of considering and resolving the matters of MPs brought to intra-parliamentary responsibility, monitoring their compliance with the provisions of the Constitution and the ethical conduct rules, as well as giving an opinion on issues related to termination of deputy immunity, divestment of deputy mandate and loss of deputy powers.

The proposed requirements also bring along a new disciplinary measure regarding a deputy of Milli Meclis; divestment of deputy mandate is being added to the existing disciplinary measures, which are a warning, suspension of the right to speak, removal from the meeting hall, reprimand and loss of deputy powers.

The bill has been recommended for a plenary meeting at a joint meeting of the Human Rights Committee and the Legal Policy and State Building Committee of Milli Meclis on 20 April.

Rules Being Laid Down for Conducting Parliamentary Meetings Behind Closed Doors