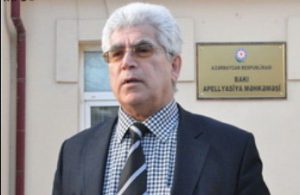 On 9 February, the Supreme Court heard an appeal filed against a travel ban prohibiting Asabali Mustafayev, a prominent lawyer, from leaving the country, the lawyer himself reported.

According to Mustafayev, the financial activities of the Democracy and Human Rights Resource Centre he is in charge of have been continually reviewed by the Ministry of Taxes because the Prosecutor General’s Office allegedly ordered it. Despite this strenuous review, no shortcomings have been found. “Allegedly, 2 or 3 grants have not been registered with the Ministry of Justice. Under this guise, they have calculated additional taxes and imposed a sanction, although the Ministry of Taxes has published information on its website on the registration of those grants,” Mustafayev said.

The lawyer said his appeal had not been considered for about two years, and despite the fact that the decision on additional taxes and financial sanction had not taken effect, interest had accumulated on the amounts and the number had been inflated and equalled AZN 8,000. “Moreover, a second ban on leaving the country has been imposed on me at the request of the Ministry of Taxes (the first ban was imposed by the Investigation Department of the Prosecutor General’s Office). Lawyer Fariz Namazli, who defended my rights in the Supreme Court, tried to explain it to the court that it was unlawful to bring a person to financial or other responsibility for noncompliance with a decision that has not entered into force. The court should have postponed the consideration of the recommendation until the appeal filed against the ruling was considered. Finally, it is an absurdity to restrict a right which already does not exist. Despite all these facts, the appeal was not granted. It was expectable. It just added to the number of the cases in the European Court,” the lawyer noted.