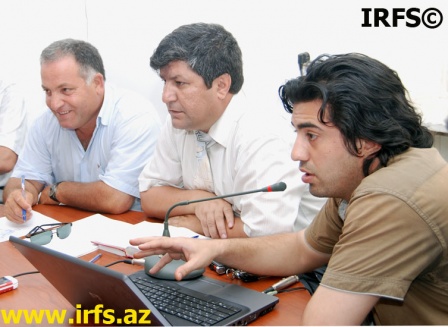 Today, August 6, in the press center of the Institute for Reporters’ Freedom and Safety (IRFS), a roundtable discussion on President Ilham Aliyev’s decree on financial assistance to press institutions was conducted.
“Khural” Newspaper Chief Editor Avaz Zeynalli said he was unhappy that the names of a number of weekly newspapers were not included on the list of newspapers (prepared by the Press Council) that received aid, and said that in effect only newspapers that are under a monopoly received aid. “I protest against this,” said Zeynalli. “I want to know on the basis of what criteria these newspapers were selected to receive 5,000 AZN and why there are only the names of 30 newspapers.” Zeynalli recommended appealing to the president to correct the list.
“Turkustan” Newspaper Chief Editor Agil Jamal noted that he did not understand how the list was composed. “Our goal is to investigate the reasons why we were excluded from receiving assistance,” said Jamal. “This must be monitored through proper means. We recommend correcting the list and presenting it to the president.”
Turan News Agency Director Mehman Aliyev said he had already spoken to the press about this matter several times. “I also do not understand these criteria,” said Aliyev. “Why weren’t 100 or 150 newspaper provided assistance instead of 30? 5,000 AZN is being assessed as assistance, but this is not assistance. This could be called a prize given within the framework of National Press Day to stimulate journalists.” Touching on the matter of the State Concept for Assistance to the Press, M. Aliyev called this document a serious document that reflects existing problems in the press and ways to solve those problems. However, Aliyev said he could not rule out that there will be problems with the management of the project.
A number of editors from other newspapers, including “Reyting,” Yeni Chag,” “Nota Bene,” and “Savash,” also expressed concern about not being included on the list and put forth suggestions on ways to solve this.
IRFS Chairman Emin Huseynov said he did not have any information that some of the press institutions on the list are not active. However, according to Huseynov, if the president really wanted to improve the situation he would have taken other steps.
Previous Post