SHAREHOLDERS HOLD PRESS CONFERENCE REGARDING VIOLATION OF THEIR RIGHTS 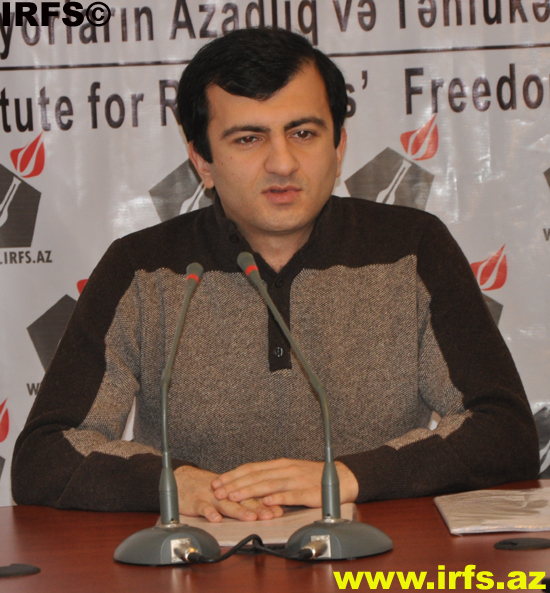 Today, 3 March, in the press centre of the Institute for Reporters’ Freedom and Safety (IRFS) “Baki ANM” OSS shareholder Alizade Shahin held a press conference regarding the violation of rights of more than 400 people by “Accord” OSS. We present the press release complied by the organizers to your attention the press-release.
“Honorable Mass Media representatives, the press conference is dedicated for rude violation of the property rights of more than 450 minoretar shareholders of “Baki ANM” OSS by “Accord” OSS. “Accord Construction Industry” OSS seized the land belonging to “Baki ANM” OSS and conducts construction jobs there. That area is situated behind the furniture store “Kral” in Narimanov district; constructed buildings are called “Kosmos” living massive. (Maybe the store “Kral” is called so for the honor of its late name “Kosmos”).

Regarding “Baki ANM” OSS and its privatization:

“Baki ANM“OSS became a shareholder society in 1997, waited for its privatization. The privatization began on 22 April, 2006 and ended on 19 September, 2006. There was 123.63 hectare land field (See: certificate) and 4134.62 square meter building (SEE: technical passport) until construction jobs began in the balance of Shareholder society. Now the society has only 123.63 hectare land because the buildings were pilled down. 81.11% shares of the society belonged to Tagiyev Tahmiraz Tagi oglu and the rest 18.89% belonged to the shareholder till the privatization ended. Tagiyev Tahmiraz Tagi oglu was also the chairman of the shareholder society. For your information, Mr.Tagiyev is also the chairman of New Azerbaijan Party Narimanov district organization.

Regarding the development of the events:

“Accord Construction Industry” OSS are lost in the hearing held on the lawsuits filed by “Baku ANM” OSS shareholders. They don’t have more time. Agreement which is legal document in the conducting of construction in this field   was concluded by notary in contradiction with law and signed by administrative personnel chairman who doesn’t have authority.

Decision should be issued in the meeting of shareholders under article 99.3 of the Civil Code and agreement was concluded for the purpose of damage to society in contradiction with regulation of society.

Documents that confirmed mentioned above were collected in the case materials in court. Although it is clear for talented judge and also little child that contract was an invalid, shareholder lost their hope regarding fair decision to be issued by Narimanov District Court Judge Elshane Valiyeva. They asked court to ban selling of buildings of “Accord Construction Industry” OSS and to freeze funds until end of trial investigation. But Judge did not fulfill this request.  Although shareholders have doubts, they are optimist. Because they did not intend to give this case only Judges` hope. If Judges issued unfair decision, shareholders will demand Fikrat Mammadov to give explanation regarding this disgrace. They intend to appeal UNO, Council of Europe and other international organizations.

We request Mass Media to give accurate and objective information to community regarding hearing held in the area of Cosmos massive and land and other documents. Citizens should determine place where they put their fund, ten thousands fund is not less, they should put their fund in the faithful places and then they will not face with shareholder’s curse and court problems.

At the same time, shareholders appealed to Tax Ministry, and requested to pay attention tax evasion in the contract concluded between “Baku ANM” OSS and “Accord Construction Industry”.  Tax Ministry said that Tamiraz Tagiyev gave an explanation that this society was privatized and there is no shareholder there. They considered that Tagiyev is Chairman of YAP and they did not demand evidence regarding writings in the explanation and summed up to look through application under this explanation.

Shareholders appealed to the Ministry of Tax, to Mr. Fazil Mammadov saying that the words which Tahmiraz Tagiyev said are not corresponding to real facts.

Shareholders appealed to Justice Ministry regarding affirmation of bartering contract in notary office and violation of law by notary and they request notary and registration office chief to express his position and to take serious measures regarding notary. Appeal was addressed recently that is why response was not come from Ministry.