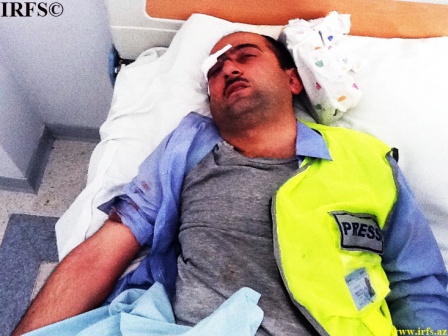 “It was determined that some of the SOCAR employees exceeded their power during demolitions of the illegal houses in Sulutapa settlement,” said SOCAR president Rovnag Abdullayev in an interview with journalists, APA news agency reports.
He also commented on the case journalist Idrak Abbasov, brutally assaulted on April 18th:

“I can state with full confidence that SOCAR has conducted a fair investigations into the Sulutapa events. As a result, we found that some of our employees exceeded their power to some extent. They will undoubtedly be punished.  But I want to add that those events did not involve the beating of a journalist. The person who claims he was beaten during that event did not have any journalist ID on him. We know that this person and his brothers have illegal houses and land in Sulutapa. There are some circles in Sulutapa that illegally misappropriate land and then sell it on.”

On April 18th 2012 Zerkalo newspaper and IRFS correspondent Idrak Abbasov was beaten by State Oil Company employees during the Sulutapa housing demolitions, as he was filming. The journalist sustained serious injuries, and is still undergoing medical treatment. SOCAR started a smear campaign against Idrak Abbasov two days ago. Abbasov was wearing a press jacket and had carrying his journalist ID for Zerkalo newspaper when he was beaten. This is supported by photo evidence.