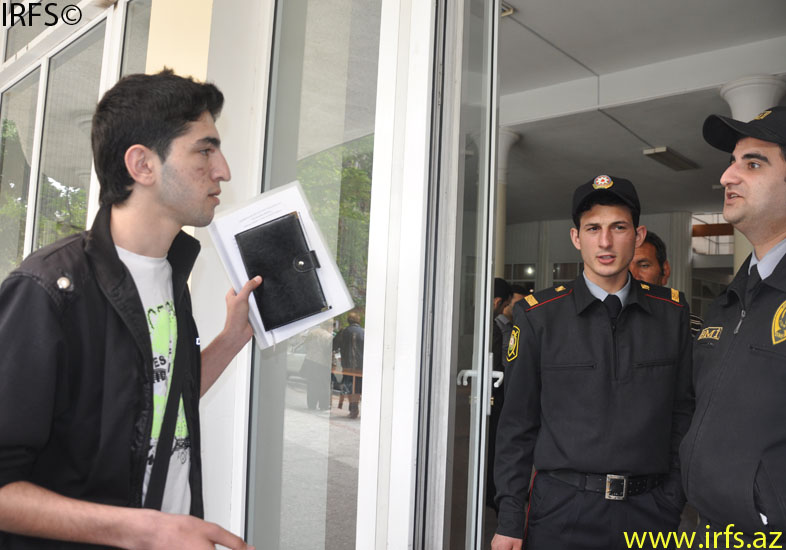 Today, 19 May, Poligon information Agency’s editor Elmin Badalov conducted a peaceful action against his dismissal from the State Oil Academy of Azerbaijan (SOAA).
He had course papers, a book and copy-book in his hand, and wanted to enter the second building of SOAA when guards blocked his way and did not allow him to enter the Academy. Then the police, who were in front of the Academy, interfered. After a police Capitan talked with Elmin Badalov briefly, he took the journalist together with Rovshan Najafov, a member of the Defense Committee for the Rights of Youth, to the Nasimi District Police Department.
Elmin Bedelov told the Institute for Reporters` Freedom and Safety that they were held for an hour in the Nasimi District Police Department and received a warning for their attempt to conduct an unsanctioned action. The student-journalist added that he wanted to protest against his dismissal from the Academy by pretending that he was going to participate in the class.
Elmin Bedelov was dismissed from the State Oil Academy on 19 January 2010. On 12 November 2009 Elmin Bedelov published an article on pia.az website (“Reportage from Azerbaijan State Oil Academy”) regarding bribe cases and financial frauds in the Azerbaijan State Oil Academy. The student-journalist claims that pressure used against him and his failures are related to his article. On 17 February he appealed to the Nasimi District Court to restore his rights. But his lawsuit was not fulfilled. Therefore he filed an appeal against the decision on 5 May.

PROBLEMS CREATED BY FLOODINGS WAITING FOR THEIR SOLUTIONS