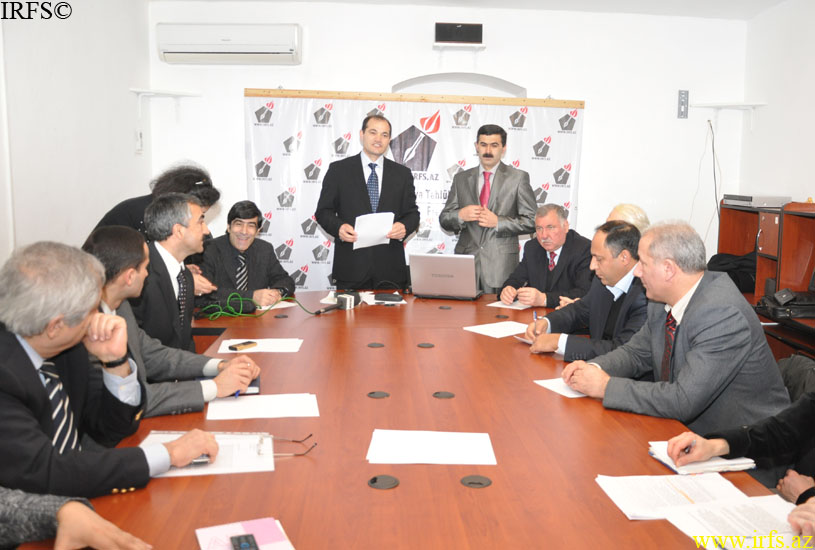 Today, 14 January, in the press center of the Institute for Reporters` Freedom and Safety, the Support Coalition for Civil Society (SCCS) conducted a roundtable on the theme “Problems of Civil Society: State Registration of NGOs and Gaps in the Legislation.”
Support Coalition for Civil Society Coordinator Razi Nurullayev said that SCCS offers to create a network of NGOs that have not been registered. Razi Nurullayev added that the SCCS wants to create a working group together with the Council of State Support for NGOs and international organizations and wants to achieve the solution of issues regarding registration, improving and simplifying accountability process through discussions.

Support Coalition for Civil Society Council member Ogtay Gulaliyev said that gaps in the Law on NGOs may be used by officials to suppress representatives of civil society. Ogtay Gulaliyev touched upon the decree signed by President Ilham Aliyev on 25 December regarding changes and amendments to Law on NGOs, and said that this decree will create serious obstacles for NGOs to carry out bank operations. Gulaliyev added that changes made to the Apartment Code may create serious problems for NGOs.

Law Education Society Chairman Intigam Aliyev said that the registration of NGOs has been a problem in Azerbaijan for a long time and remains a serious problem despite large attention of international organizations. He added that appeals to courts regarding registration have yielded no results.

“There were 10 court cases regarding registration in 2009 only,” said I.Aliyev. ‘Center for Election Monitoring and Democracy Education’, ‘Media Monitoring Center’ and other NGOs were on this list.”

State Support to NGOs Council member Sahib Mammadov noted in his speech that problems with NGO legislation were discussed during the event conducted by the Civil Society Defense Committee yesterday, and that he gave information to the Council regarding the issues that the representatives of the civil society are concerned about. He stated that these issues will be discussed during the event to be held by the Council for State Support to NGOs on 15 January.

Other civil society representatives provided their feedback and suggestions on the issue.

Representatives from the Council of Europe and OSCE Baku Office participated in the event.