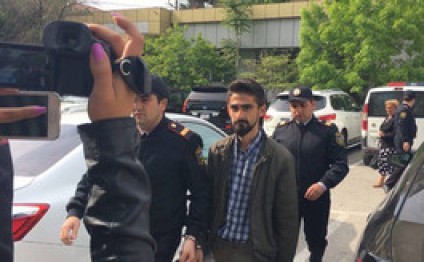 On 14 March, the Supreme Court chaired by Judge Imran Hajigayibov held a hearing on the cassation appeal against the decision of the preliminary hearing of Baku Appeal Court of 13 December 2016.

Giyas Ibrahimov did not attend the proceedings. Youth activist’s lawyer Elchin Sadigov made a speech on the cassation appeal. “As you know, my client has been convicted for writing a slogan on former president Heydar Aliyev’s statue. We lodged numerous motions both during the preliminary investigation and in court, but despite being sufficiently substantiated, none of them was granted.

Besides, I filed a motion in the appeal to conduct the appeal proceedings through a partial retrial (examination of witnesses and documents, etc.) and demanded that our previously filed motions be investigated. However, Baku Court of Appeal made an unjustified decision to conduct the proceedings without judicial investigation. At the court hearing dated 26 December 2016, I filed repeat motions, but again none of them was granted, although they related to proofs and facts proving the violation of the right of defence and the groundlessness of the charges. As the last court instance to consider the case on merits, Baku Appeal Court should have investigated that evidence and proofs presented by the defence without leaving any room for doubt when making the final decision. However, by rejecting our motions, the court violated the right to an effective consideration of appeal provided for in Article 6 of the Convention for the Protection of Human Rights and Fundamental Freedoms,” the lawyer noted.

Public prosecutor Rasul Abbasov requested that the appeal is dismissed, and the decision of the preliminary hearing of Baku Appeal Court of 13 December 2016 be upheld.

After an on-the-bench deliberation, the judicial panel denied the appeal and uphold the decision of the preliminary hearing of Baku Appeal Court of 13 December 2016.

Recall that, lawyer Elchin Sadigov had filed the following substantiated motions at the court of appeal: remove Giyas Ibrahimov from the enclosed glass dock and let him sit next to his lawyer with the purpose of ensuring his right of defence; recognise violation of his right to presumption of innocence and involve the Ministry of Internal Affairs in the case; conduct forensic examination to determine to whom the fingerprints on the drug packets belonged; request camera recordings of the Temporary Detention Centre of Narimanov district from the period of Giyas Ibrahimov’s detention in the Centre; obtain the crime records registration book and the operation file from Baku City Main Police Department; summon and interrogate Shirali Babayev, the officer who had made the decision to hold expert examination, and the two attesting witnesses; send inquiries to courts to determine other criminal cases the attesting witnesses had participated in earlier; replace Giyas Ibrahimov’s pre-trial detention with house arrest or release on bail. However, none of the above motions was granted.

Jail Terms of Ganimat Zahid’s Relatives Reduced by One Year