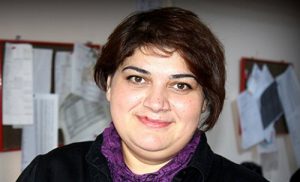 On 16 February, the Supreme Court chaired by Judge Ingilab Nasirov considered investigative journalist Khadija Ismayilova’s cassation appeal (a case regarding the legality of a ruling), lawyer Fariz Namazli has reported. The request sought to drop the ‘illegal business’ charge of which they convicted the journalist.“The disposition of Article 192 of the Criminal Code has been concretised with the amendments made to the legislation that took effect on 1 June 2016. Previously, Article 192 referred to the act as “operating without a state registration.” After the amendment, it concretely relates to the entrepreneurial activity carried out without tax registration or a license. The indictment against Khadija Ismayil did not include the charges of non-registration with the tax authorities.

The bill of the indictment reads that she had been working for a foreign media outlet (Radio Liberty) without being accredited by the Ministry of Foreign Affairs of Azerbaijan, and made income amounting to AZN 79,480 during the years 2010-2014. So, we appealed to the court to discontinue the proceedings on that charge, because this act has been decriminalised under the above-said amendment. However, just like the lower courts, the Supreme Court also rejected our request, and upheld the original judgment,” Namazali said.

Background: Khadija Ismayilova was arrested on 5 December 2014, and was charged under Article 125 of the Criminal Code (inciting to suicide). She was suspected of driving journalist Tural Mustafayev to suicide and was ordered detained. Later, Khadija Ismayilova faced additional charges under Articles 179.3.2 (misappropriation or squandering, in a significant amount), 192.2.2 (illegal entrepreneurship), 213.1 (tax evasion) and 308.2 (abuse of authority). Although acquitted of the ‘driving to suicide’ charge afterwards, the journalist was convicted of the other charges and was sentenced to 7 years five months under Baku Grave Crimes Court’s verdict. Following an appeal by Khadija Ismayilova, the Supreme Court replaced her jail sentence with a conditional sentence of 3 years six months, and she was released. Khadija Ismayilova was subsequently acquitted of the charges under Articles 179 and 308 of the Criminal Code, and the court reduced her conditional sentence from 3.5 years to 2 years three months.

Khadija Ismayilova does not accept the charges and has declared that she was arrested for political reasons related to her journalistic activities.