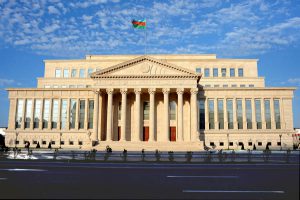 On 7 February, the Supreme Court chaired by Judge Rahib Nabizade considered lawyer Alayif Hasanov’s appeal against lower courts’ decisions on his lawsuit against the Bar Association due to his disbarment. The attorney’s appeal was not granted.

During his speech in court, Hasanov said his disbarment was unlawful. He noted that his deprivation of the membership of Bar Association was discrimination. The lawyer asked the court to quash the lower courts’ decisions, but his request was denied. Alayif Hasanov said he would submit a complaint to the European Human Rights Court against the Supreme Court’s decision.

Recall that, Alayif Hasanov was disbarred while serving as the lawyer of expatriate human rights defender Leyla Yunus. The Bar Association justified its decision by referring to the conviction of the lawyer. The court decision convicting Hasanov had been delivered based on the complaint of Nuriyya Huseynova, human rights defender Leyla Yunus’ cell-mate when she was in Kurdakhani detention centre.

In her message to the public conveyed by her lawyer, Leyla Yunus had stated that ex-convict Nuriyya Huseynova had been put into her cell deliberately. Moreover, the human rights defender asserted that the woman had beaten her. Huseynova sued the lawyer over this and succeeded in having him convicted under Articles 147 (slander) and 148 (insult) of the Criminal Code.

Alayif Hasanov believes that the termination of his lawyer activity is politically motivated.