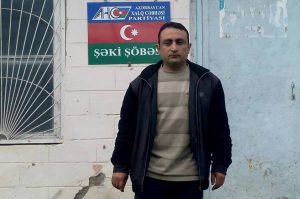 As we reported earlier, Chairman of the opposition party APFP in Shaki, Azerbaijan, Islam Hasanov, was detained on 6 February. He was summoned to the local police department and arrested over an alleged argument with a traffic police officer. On 7 February, they brought Hasanov before the court. Shaki City Court sentenced Hasanov to 25 days in jail.

Samir Hasanov, the Youth Committee chairman of APFP in Shaki, is still held in police custody. He was detained by the police on 7 February, when taking food to the police department for the local party chairman Islam Hasanov.

On 7 February, the police came to Baku-based Shaki branch activist Rauf Abdurrahmanli’s father’s house and told Rauf’s parents that Rauf must come to the police department.

APFP deputy chairwoman Gozal Bayramli says Shaki branch leadership and activists have faced pressure for years. Many activists have repeatedly been jailed for several days and sentenced to substantial fines, and their family members have been harassed. “In the years 2012 through 2015, there were police interventions in several meetings and even a conference of the branch. All this goes to show that the local authorities are unwilling to give up their illegal actions of interfering with the lawful activity of the APFP Shaki branch. Islam Hasanov was required to sign a ready statement on his departure from APFP, but he refused to sign. Therefore, the party activist was beaten up by the police and subjected to violence,” Bayramli noted.