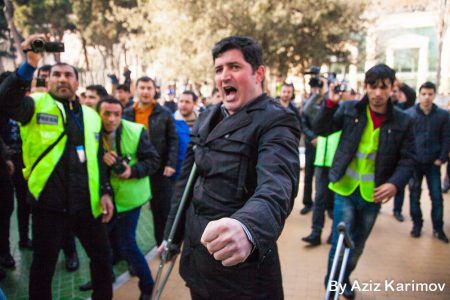 The lawyer said the decision was unfair, as the complaint was granted only partially.

Recall that, Asif Yusifli was sentenced to 7 years 6 months in jail by the judgment dated 30 July 2015 of the panel chaired by Judge Zeynal Agayev of Baku Grave Crimes Court. Baku Court of Appeal heard the appeal filed against this judgment and upheld the judgment. The sentence was later reduced to 6 years by the Supreme Court.

On 19 August 2016, Nasimi District Court chaired by Judge Matanat Hajiyeva held a hearing in Prison #6 on the appeal seeking the change of Asif Yusifli’s sentence. The court reclassified the case from Article 178.3.2 (fraud, committed by causing a large amount of damage) of the Criminal Code to Article 178.2 (fraud, committed through abuse of trust), without touching the jail term. The cassation appeal was filed against this decision.

Karabakh war veteran Asif Yusifli was arrested in November 2014, based on the complaint of a woman by name Farida Zulfugarova. Yusifli was charged with defrauding the woman of AZN 7,700. Asif Yusifli does not plead guilty to the charges levelled against him, claiming that his action does not constitute a crime.

Twelve Years On, Still No Justice for Elmar Huseynov