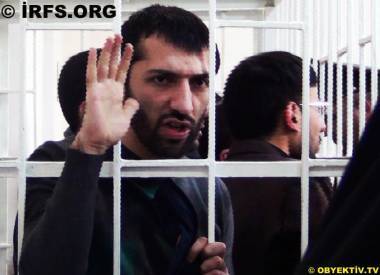 Supreme Court under the chairmanship of the judge Ingilab Nasirov considered the cassation appeal filed by Nijat Aliyev, the editor-in-chief of the website azadxeber.org. Nijat Aliyev was arrested in 2012.  He is serving a 10-year jail sentence handed down on 9 December 2013. He was convicted of drug possession, illegal distribution of religious literature, appealing for seizure of power by force and incitement to national, racial or religious hostility and hatred, and discrimination against citizens. The sentence was later upheld by the court of appeal.

Journalist Nijat Aliyev’s lawyer Yalchin Imanov defended the cassation appeal at the hearing. “The charges brought against Nijat Aliyev under Articles 167-2.2.1 (illegal production, import, sale or distribution of religious literature, audio and video materials, goods and products and other informational materials of religious content – committed by a group of people on preliminary arrangement), 234.1 (illegal purchase or storage – without the intent of selling – of narcotics or psychotropic substances in quantities exceeding those necessary for personal consumption), 281.2 (public appeals directed against the state) and 283.2.3 (instigation of national, racial or religious hatred and hostility) of the Criminal Code  did not find a proof in the course of both the preliminary investigation and the trial. According to the charges brought under Article 234.1 of Criminal Code, Nijat Aliyev illegally obtained – without the intent to sell – at a time and from a source unknown to the investigating authority marijuana weighing 6.92 grams made from cannabis plant using some primitive methods. According to the charges he either carried or kept it in his apartment located at the address 51, 17a H.Seyidzade Street, Nasimi district, Baku until May 20, 2012. The defense believes that it was just a ‘standby’ charge, which served as formal legal grounds to arrest Nijat Aliyev. In his testimony provided in the court of first instance, Nijat Aliyev stated that on May 20, 2012, when he was in the Killer Menswear Shop located near the Memar Ajami metro station, about 20 men wearing civilian clothes and uniformed police officers from Nasimi and Yasamal district police departments busted the shop, seized his, the salesperson’s and the buyers’ phones, cuffed his hands and took him to Yasamal district police office #27, where  he was interrogated by about  10 plainclothes men. It was happening in the absence of a defense counsel and he was insulted and tortured during the course of interrogation. As a result of the tortures, he suffered injuries, had his face damaged, two of his teeth were broken, his left eardrum was seriously damaged as a result of the attacks. He eventually fainted because of the tortures. Nijat Aliyev was subject to inhumane and degrading treatment and was not offered food or water during this process. In his court testimony Nijat Aliyev further stated that after beating him for a long time and threatening to bring his relatives to the police office and torture them they suggested that he choose between drugs and weapon. He said that as a result of the tortures and the threats he was forced to sign the protocol that the drugs, which had been planted on him by the police officers at the police office #27, belonged to him. At his court testimony, Nijat Aliyev did not confirm the statements that he provided to the investigating authority on May 21, 2012  (in the capacity of the suspect) and on May 22, 2012 (as the accused), and said that he was forced to write – under the dictation of Yasamal District Police Department investigator Janali Valimammad oglu Nuriyev – that he allegedly found the drugs wrapped in a cigarette pack cellophane on the ground on the right side of the bridge while passing through the area known as Papanin, 3rd Micro-district, Baku at around 12 o’clock on May 20, 2012 and put them for personal use into the rear left pocket of the black trousers that he was wearing. He further wrote that the drugs were found and seized during the search of his clothes in the presence of witnesses at Yasamal district police office #27. Nijat Aliyev said that he was forced to sign the statements after being subjected to unthinkable and horrible tortures at Yasamal district police office #27 and Yasamal District Police Department  upon his arrest on May 2012, 2012.  The witnesses, who testified in his trial, gave contradictory testimonies. During the judicial examination it was fully established that the investigating authority had grossly violated the requirements of the Criminal Procedure Code during the preliminary investigation, failed to fully, comprehensively and objectively investigate all circumstances relating to criminal proceedings, and neglected the duties and principles of criminal proceedings. However, Baku Grave Crimes Court and Baku Appeal Court failed to take these facts into account when delivering the verdict. I request the court makes the decision to rescind Baku Appeal Court’s decision of June 27, 2014,” the lawyer said.

By the court’s decision, the cassation appeal was rejected and Baku Appeal Court’s verdict of June 27, 2014 was upheld.