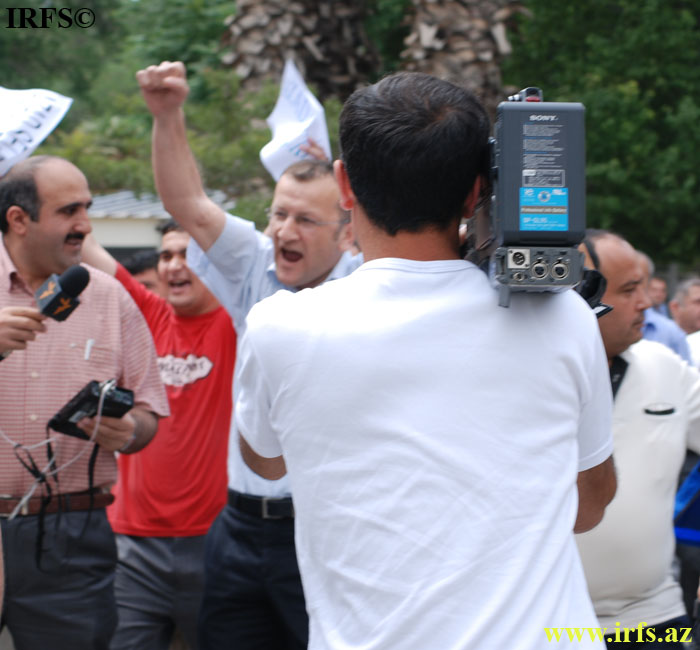 Today (17 June) a group of Musavat Party members attempted to conduct a protest action unapproved by city leadership in front of Baku City Executive Power (BCEP).
According to the Institute for Reporters’ Freedom and Safety, although the action was planned to begin at noon, “Icherisheher” metro station and BCEP was already under police control at 11:30.

At approximately 12:05 pm a group of Musavat members started to move forward from the metro to BCEP. Civil clothed policemen took the Musavat members by their arms immediately and sat them on the “Mercedes” bus which was going on the route of the bus #177. “Yeni Musavat” newspaper correspondent Afgan Muxtarli was among them.
After about ten minutes, a group of Musavat members walking from metro station to Executive Power building and chanting “Azadlig” (Freedom), “Azad Sechki” (Free elections), and “Istefa” (Resignation) were met by the police. This time the police beat and sat 7 people on a bus. “Yeni Musavat” newspaper correspondent Mustafa Hajibeyli was also among these detained people. After this a couple of small incidents happened and 4 more Musavat members were detained.
Action participants couldn’t approve the resolution of the picket, but were able to distribute it. In the resolution the action participants demanded that Article 49 of the Azerbaijan Republic Constitution and Azerbaijan Law on “Freedom of Assembly” were fulfilled and the appeal of Musavat Party about march-rally was answered according to law. It was demanded in the resolution to secure the right of citizens to freedom of assembly.
According to Sabail district Police Department Chief Deputy Kamal Valishov, police detained 12 people who were trying to disturb public quiet.
“Yeni Musavat” Newspaper Editor-in-chief Rauf Arifoglu told IRFS that Afgan Muxtarli was released after he called Internal Ministry Public Relations Department employee Ehsan Zahidov ,but he didn’t have any information about Mustafa Hajibeyli.
Musavat Party Chairman Deputy Mehman Javadoglu told IRFS that police detained 16 people altogether and took them to Police Unit #9 of Sabail District Police Department. According to him, all of the detained action participants, including Mustafa Hajibeyli, were released at around 3:00 pm.
The action was monitored by Political-military Chief of OSCE Baku Office John McGregor and his assistant Elgun Tagiyev and Julienne Marken.