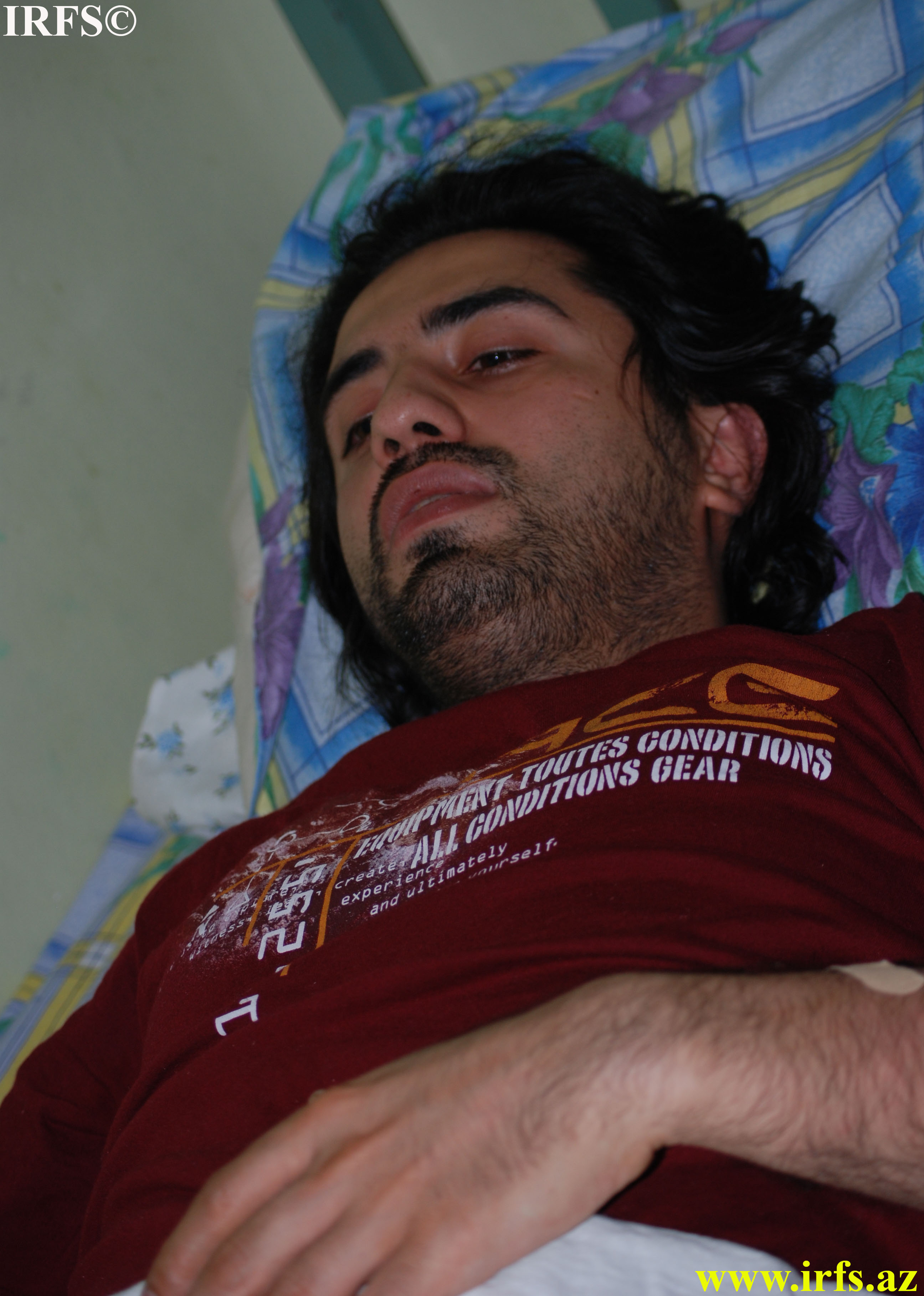 The Institute for Reporters’ Freedom and Safety Chairman Emin Huseynov, who was beaten up in the Police department #22 three days ago was transferred to a regular hospital room from the Centralized Emergency Medical Assistance Hospital today (17 June).
Also, Huseynov had computer tomography today in the Nasradin Tusi Scientific Research Institution. ”Turan” Information Agency Director Mehman Aliyev told this to IRFS.

According to Aliyev, E.Huseynov doesn’t still feel well and can’t receive food.
E.Huseynov told “Media Forum” site that he has headaches, cannot eat anything and can only sip water, “I still experience some dizziness and nausea. The doctor of critical care department examined me today. They suggested that I stay in the hospital for one more week because I sustained head and brain trauma.”
E.Huseynov said he encountered something strange today in the morning, “Two white robed people entered my hospital room in the morning. One of them introduced himself as the Chief of the Department and the other as the doctor who received me. Both of them told me that my condition was normal and I should leave the hospital urgently. They said I didn’t sustain any trauma. They didn’t talk like doctors, but ordered like police. I told them about this and refused to talk to them. A little while later, the Chief of the Department came to the room, and I told him about the incident. In reply to this he said, ‘I don’t know who said what, but you sustained light brain trauma’.”
“The statements made by IRFS Chairman Emin Huseynov to press about being subjected to pressure by police are far from the truth. His thoughts published in different mass media means are contradictory,” Internal Ministry Press Service employee Ehsan Zahidov told this to “Turan”.
According to him, the issue related to Emin Huseynov has been investigated. “On 14 June a group of people conducted an unapproved event in a café. Police demanded the unapproved event discontinue. 20 people were brought to Nasimi Region Police Department #22 to identify and to conduct some explanations. After they were examined they were released. Then E.Huseynov said he was feeling bad. An ambulance was called immediately. During the medical examination, it was discovered that his health condition was connected to his previous illness. And during the examination it was clarified that Huseynov’s blood pressure was high up to 190 and that is why he lost his consciousness,” said Zahidov.
We note that Police Department #22 told “Radio Liberty” that IRFS Chairman simply injured himself.
However, Huseynov told “Mediaforum” site that he was beaten up, and he well remembers people who struck him. He added that the was examined by medical court examination, and Yusif Abdinov, the investigator of Nasimi Region Police Department #22, interrogated him.
The Committee to Protect Journalists (CPJ) which is located in the US stated that it was angered by the beating of Emin Huseynov on 14 June in Baku Police department, “We are appalled by this brazen attack on our colleague Emin Huseynov.”
According to “Turan”, CPJ coordinator on Europe and Middle East Nina Ognianova calls on Azerbaijan Government to investigate this incident and bring those responsible to justice.