The Case of Giyas Ibrahimov, Youth Activist Jailed for 10 Years for Spraying the Graffiti on a Statue of the former President of Azerbaijan 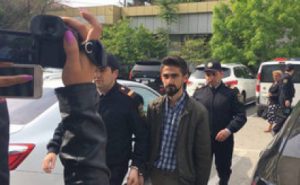 On 25 October, a court in Baku handed a 10-year jail sentence to Giyas Ibrahimov, a 22-year-old youth activist detained after spraying graffiti on a statue of the former President of Azerbaijan, Whilst in detention, activist was tortured into ‘confessing’ to serious drug crimes.

Earlier this month, Giyas Ibrahimov’s barrister Elchin Sadigov filed a petition with the court to hear their appeal as a partial retrial. The petition was denied.

In court, Giyas Ibrahimov was seated in an enclosed glass dock, guarded by security officers.Elchin Sadigov filed a motion to request that Ibrahimov is not kept in a glass cage but allowed to sit beside his barrister. The court rejected the motion. The European Court of Human Rights has issued several rulings in recent years criticising the use of locked docks as degrading or inhumane, including in in the former Soviet republics of Armenia, Georgia, Moldova and Russia.

Giyas Ibrahimov’s barrister Elchin Sadigov said:
“During the examination of the case by Baku Grave Crimes Court, I filed a motion to summon Shirali Babayev, a senior inspector for Main Drug Enforcement Department of the Ministry of Internal Affairs, and two officers from the 25th police station to testify as witnesses. Although the motion was granted, the court subsequently failed to fulfil it allegedly because they were on leave and it was impossible to bring them to court,” the lawyer said. “In addition, I requested a fingerprint analysis to determine to whom the finger marks on the drug packets allegedly found on Giyas Ibrahimov and in his apartment belonged. I kindly ask the court to sustain these petitions and to order a partial retrial of the case.”

Public prosecutor Hafiz Imranov asked for the petition to be rejected.

After a 10-minute deliberation, the court dismissed the petition without providing any legitimate ground.

In court, Giyas Ibrahimov was seated in an enclosed glass dock, guarded by security officers.Ibrahimov’s barrister Elchin Sadigov filed a motion to request that Ibrahimov is not kept in an enclosed glass dock but allowed tosit beside his barrister. The court rejected the motion. The European Court of Human Rights has issued several rulings in recent years criticising the use of locked docks as degrading or inhumane, including in in the former Soviet republics of Armenia, Georgia, Moldova and Russia.

The second petition filed by Ibrahimov’s barrister called on court torecognise the violation of the presumption of innocence and involving the Ministry of Internal Affairs (MIA) in the case. “MIA has released a statement that Main Drug Enforcement Department, in conjunction with the 22nd police station of Nasimi district and 25th police station of Nizami district, seized 2.607 grams of drugs from Giyas Ibrahimov and 1,010 grams of drugs from his apartment. The statement has stated it not as an assumption, but as a fact. This is a violation of the presumption of innocence,” the lawyer said. The court denied the petition.
A defendant’s right to be presumed innocent is one of the cornerstones of the right to a fair trial.
Azerbaijan is a state party both to the European Convention of Human Rights (ECHR) and to the International Covenant on Civil and Political Rights (ICCPR), which represent two of the most important instuments in the protection of presumption of innocence.
The next two motions solicited the court to conduct an examination to identify whom the finger marks on the drug package belonged to as well as to investigate whether the court-appointed barristerOktay Aliyev was capable to fufil his role in the case. Sadigov noted that barristerOktay Aliyev had handled 21 cases in one month, which was physically impossible to cope with, and had also signed the investigation papers without participating in the investigative actions carried out. The court dismissed both motions.

Sadigov then petitioned the court to obtain the crime records registration book and the operation file from Baku City Main Police Department, due to the allegation in the indictment bill that an operational tip-off had been received about Giyas Ibrahimov. “To determine this, we want the court to obtain and examine those documents and question the persons who received the operation tip-off, if any,” the barrister noted. This petition was similarly turned down.

The court also dismissed Sadigov’s petition to summon attesting witnesses in the case, Khagani Babayev and Rahim Tagiyev and interrogate them as additional witnesses, and to send inquiries to Nizami and Nasimi district courts and Baku Grave Crimes Court to find out what other criminal cases those witnesses had taken part in.

The motion to replace Giyas Ibrahimov’s pre-trial detention with house arrest or to release him on bail was also denied by the court.

Judge Vugar Mammadov ruled that the appeal hearing would be conducted without judicial investigation (i.e. without examining the witnesses or any additional evidence). Sadigov requested time to file an appeal with the Supreme Court against the ruling of the preliminary court hearing.

The next hearing was set for 29 December, 4 pm.