The future of broadcast media discussed 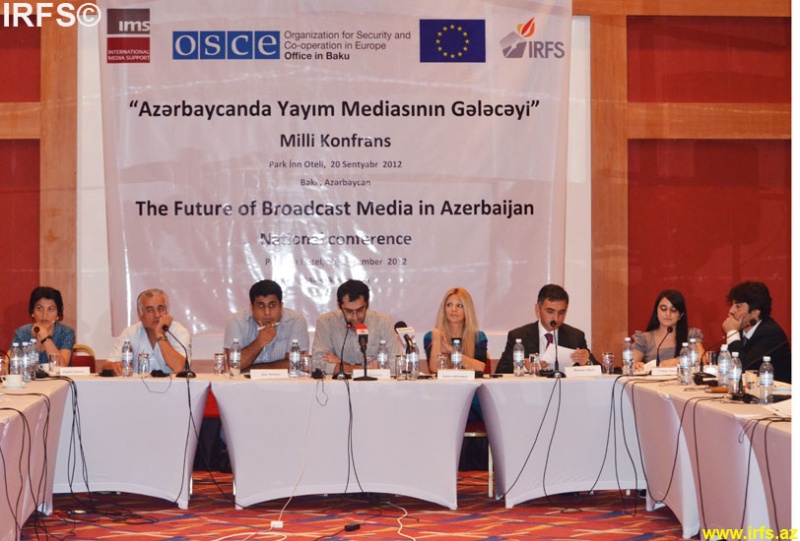 The future of Azerbaijani broadcast media was in focus at the national conference, held on September 20 and organized by the Institute for Reporters’ Freedom and Safety (IRFS) with support from the International Media Support (IMS), OSCE Office in Baku and European Union. Experts and representatives from the ICT Ministry, National TV and Radio Council, international and local organizations, intergovernmental organizations, the Public Television, online radio stations and media organizations were in attendance.
The conference focused on the main challenges that impede promotion of pluralism and diversity in broadcast media, such as incompliance with the Public Service Broadcasting laws, state control over the broadcast media and its regulator, National TV and Radio Council and so on. The conference discussed transition from traditional to online media, and switchover from analogue to digital broadcasting.

IMS program manager Gulnara Akhundova drew attention to the lack of pluralism in local TV channels. “Here comes the important role of the digital media as a source of alternative information. In response to the increasing need for alternative information, IMS helped young journalists to set up the Voice of the Youth online radio, which is now popular news source among youth”.

It is mission impossible for independent media to get a broadcast license in Azerbaijan., stressed IRFS Chair, Emin Huseynov in his key note address. Switchover from analogue to digital broadcasting is supposed to be completed by the end of 2013. “In every other country, digital switchover goes hand in hand with awareness raising campaign. In Azerbaijan, the government has not made any single effort to inform the public about the digital switchover and the standards for digital television. Some countries have already declared the DVB-T standard, i.e. terrestrial digital television to become old. They now undergo transition to DVB-T 2 standard, which means better quality. We would like the panel to find answer to this question” Huseynov said.

The first panel moderated by Azerbaijan State University PhD, Gulu Maharramly, discussed the following topics: current state of the national broadcast, switchover from analogue to digital broadcasting, code of ethics in broadcast media and violation of presumption of innocence by Television and radio channels

According to the Head of Technical Department at the National TV and Radio Council, Isa Mammadov, the thirty digital broadcast stations covering 80% of the country have been installed. To be able to receive digital television signals, 130,000 poor families will receive decoders free of charge, he said.

“In the recent months, four tenders offering new frequency have been announced and granted to the state controlled media companies. The national TV and radio do not serve the interest of the public. Existing channels do not inform the public debate. People go online for the objective information. Then what is the public benefit of 60 million manat allocated for the state broadcasters? That’s a big question mark" said IREX media expert Alasgar Mammadli.

Tahir Mammadov, Director of Public Relations Department of the Ichtimai TV (Public TV) noted that TV product should meet the audience demands and expectations. The TV output should meet the following criteria: high quality, pluralism and diversity. “Ichtimai TV staff wants it as much as the audience, experts, international organizations and the European Broadcasting Union do.  We are open for discussions and criticism. But it does not necessarily mean that we should accept all the opinions as dogmas”, said Mammadov.

"It is vital to liquidate the state monopoly in the broadcasting space. There is no competition on the content of TV programs," stressed director of Media Rights Institute, Rashid Hajili.

Gunay Ismayilova, head of the online Objective TV, said that by launching this online television two years ago they aimed at raising public awareness on human rights. “Up to 6,000 video news were broadcasted through our channel for these years, half being in English and half in Azerbaijani. Our videos are very popular among the public; once a single video got 260,000 views from audience. In parallel with in-house production, we do promote visual content production throughout the country. For instance, dozen of digital media trainings for NGOs, young activists and media workers have been organized as part of Objective TV project” said Ismayilova. OTV Head extended her gratitude to the donor organizations for continued support to OTV project during its two years’ activity.

“In Azerbaijan the upload speed of the Internet is very low. This factor dramatically impedes development of the online TV in Azerbaijan. This is an urgent issue to address” said Rustam Aliyev, director of the online television Yurd TV.

In his turn, the Voice of Youth radio station director Azer Nezerov noted that online media is rapidly growing in Azerbaijanto meet demands of the ever-expanding audience. “Our materials being used by TV channels show that online media is developing very fast”, he commented.

At the end of the conference IMS’ Gulnara Akhundova and OSCE Office in Baku Democratization Officer VusalBehbudov summarized the recommendations produced by the conference participants. For instance, Akhundova stressed the need for ongoing monitoring of the traditional TV and radio content. “There is undeniable need for further support to online broadcast initiatives, which must go hand in hand with promotion of internet freedom”, she said. OSCE’ s Behbudov said it important to carry on debates and dialogue in the future. “There is a need to get all national broadcasters involved in the dialogue”, he said. In the meantime, Behbudov expressed OSCE’s willingness to support broadcast media monitoring projects.