Thousands Rally against Referendum in Baku 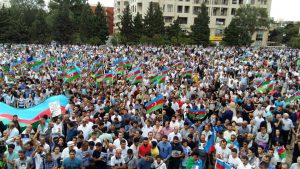 The National Council of Democratic Forces organised a protest rally in Mahsul Stadium of Baku. Observations showed that the rally attracted more than 10,000 people. The two-hour protest was held under the slogan “No to Monarchy, Stop the Pillage!” Other social and political slogans voiced during the rally included: “The Youth Say No,” “Down with Dictatorship and Monarchy, Freedom for Azerbaijan,” “Wages 105 AZN, Tuition 4000 AZN,” “We are Not Slaves,” “Azerbaijan is a Country of Monopolies,” “Support the Truth, Damn the Robber,” “Free the Political Prisoners,” etc.

Member of the National Council of Democratic Forces Vidadi Mirkamal addressed the crowds from the podium and urged them to oppose the Referendum on Constitutional amendments. He said these amendments serve the interests of one family not the people of the country.

Eldaniz Guliyev, another member of the National Council, said they wanted the liberation of the occupied territories, and condemned the arrests of theologians.

“This is the third attempt at conducting referendum since 2002, and the purpose behind it is to sustain the one family rule,” Chairman of Azerbaijan Popular Front Party Ali Karimli said, “The first referendum ensured the passage of power from father to son, and the second one secured unlimited re-election as the president.”

At this point of Karimli’s speech there was a power outage, and he continued his speech after the power supply was restored using an electricity generator.

“And, the third amendments are made so as the family members would also have posts. They reduce the age requirements for the president and MPs, because the members of Aliyev family are younger than 35 and 25,” Ali Karimli said.

Then the rally’s resolution was read out. The following demands were put forward in the resolution: cancel the anti-democratic referendum; conduct political reform; ensure independence of judiciary; conducted radical reform to get the country out of the crisis; increase payroll and pensions in accordance with the devaluation of the national currency manat and the price rise.

The organisers of the rally claimed that the police prevented people from attending the rally, denying some people entry into the stadium. Other than that, the rally ended without an incident.

Azerbaijani Political Refugees Set Up a New Organisation in Europe

Opposition Party Activist Prohibited from Contact with His Family